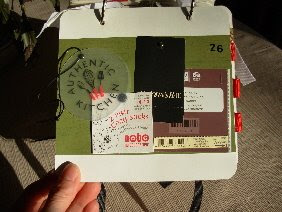 The day after...............not much to really talk about. Bill & I were both back to work and Liberty was back to day care, so there wasn't any of the after Christmas daze laze. Liberty didn't get to play with all of her new toys and we didn't get to relax as we would've have wanted to; until the following week, and boy was that a long week. Then to turn around and have the 'new year' right on top of you.
Anyways for day 26 I did a simple page using a piece of patterned paper and tags from some of the things that we got for Christmas. Just another way to document the here & now; I love my fuzzy socks, the new black wire basket on my kitchen counter and my new 'Stampin' Up' stuff, where as Bill has yet to use his new wallet.... (maybe it's a 'guy' thing). Anyways, these items completed the page enough for me that I just left it at that. And being that all the build up to Christmas was now over, unless something totally cool went down, from here on out the rest of the album only has 2 pages instead of 4, per day. I had debated on whether or not to do that, but as time went on, I realized that there really wasn' t that much left to say or document so it was easier to switch to just 2 pages and it helps give the album a quicker ending, now that the 'highlight' of the month is over.
Well short & sweet; like I said, there wasn' t much to say. Hope you'll stop in tomorrow for the beginning of my final count down, we only have 5 more days and I'll be glad to finish up this series. As I mentioned earlier this week, hopefully soon I will have some new things to share with you, we'll see.
Hope your end of the week comes quick and take care!
just B