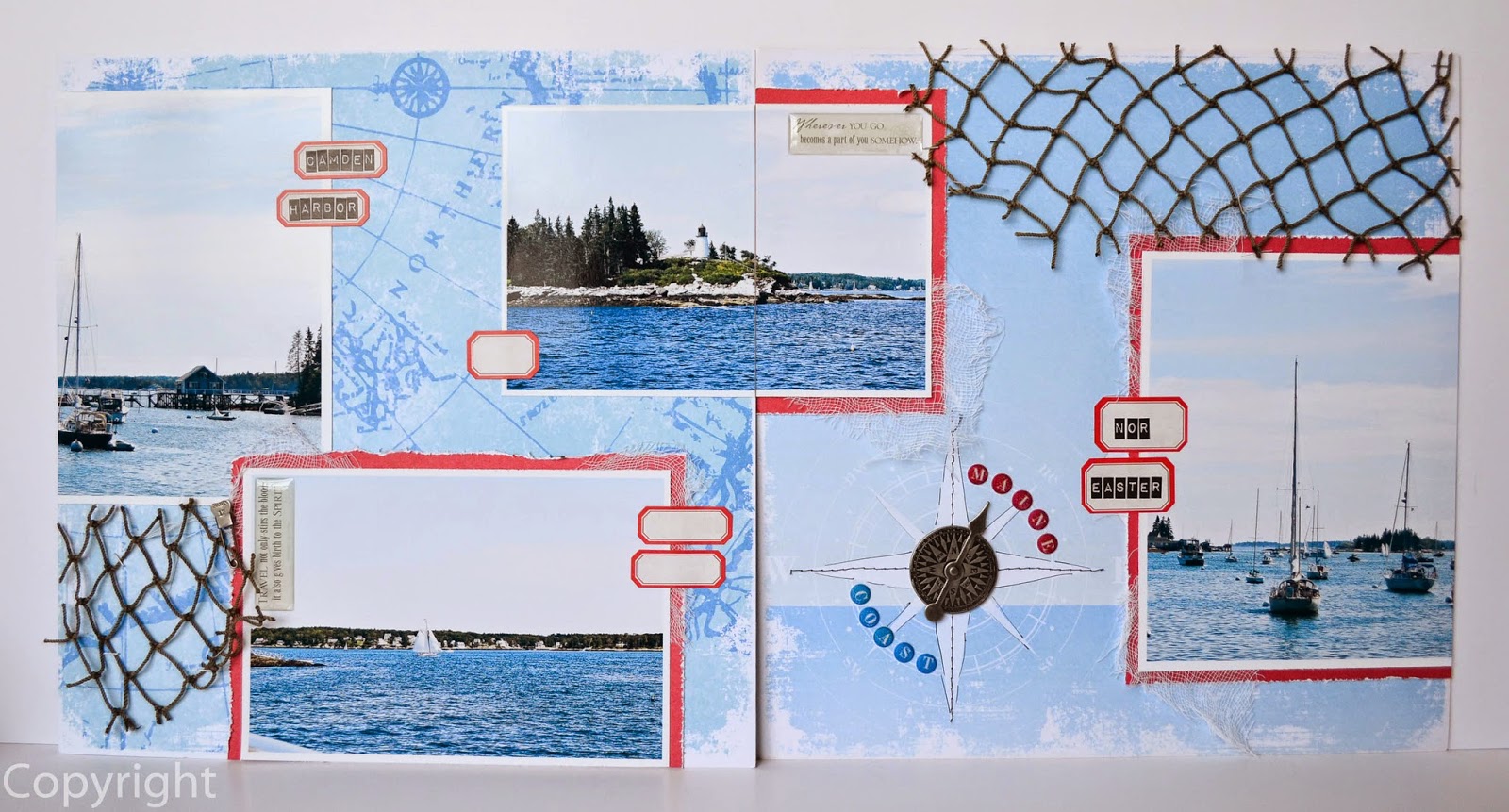 Hello Hello
How's it going?
Sorry I've been MIA this past week, I was stressin' over birthday party preparations and well I couldn't afford to screw up my now five year old daughter's birthday! So I spent most of the week shopping, cleaning, mock arranging, kitting, and then finally baking/cooking.
The results are in = Success!
She loved her Frozen party and the craft turned party favor (more on that later this week I hope) so I guess...score two points for momma. 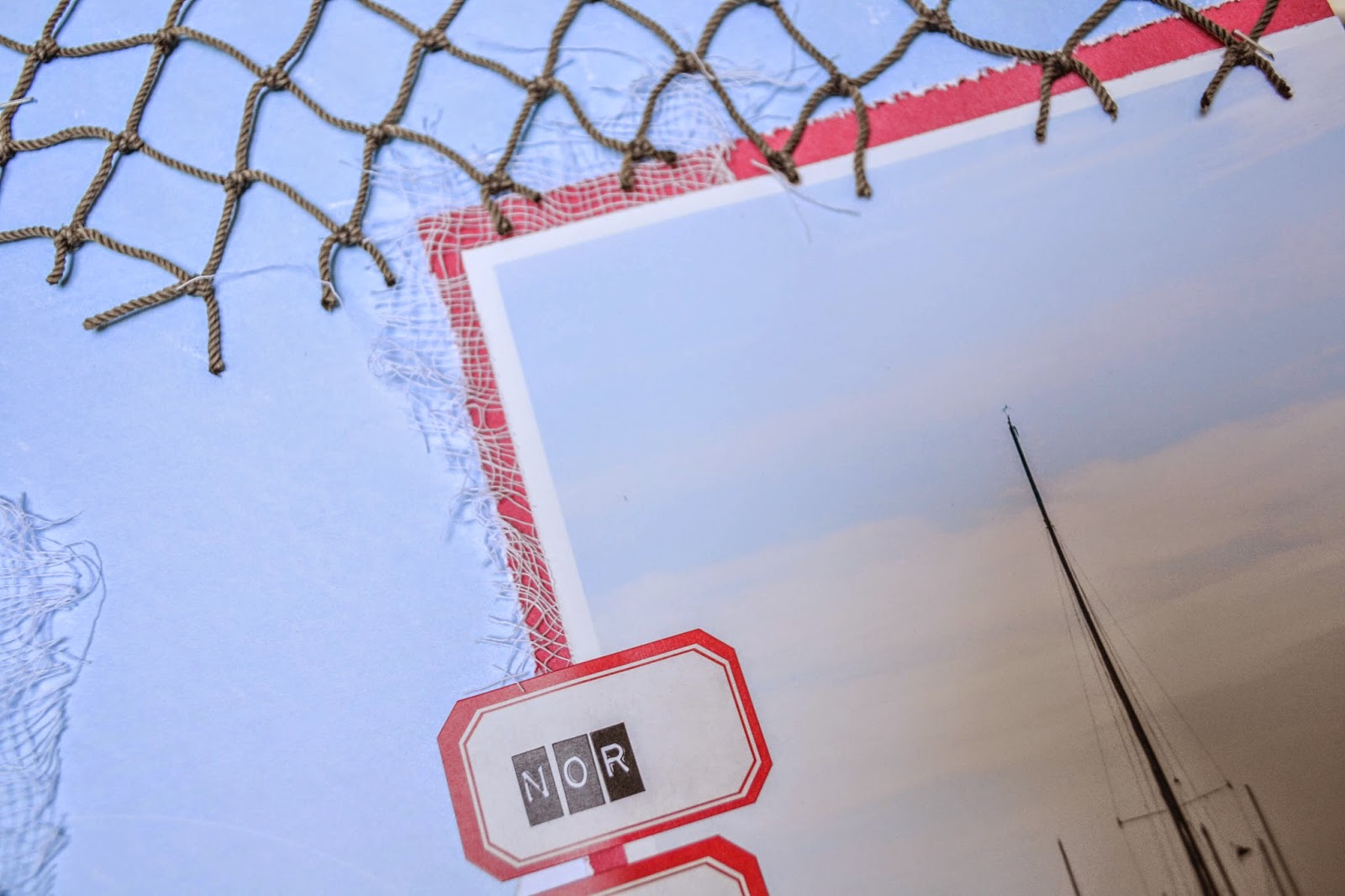 for today I want to share a layout a that I did to remember our trip to Maine in the summer of 2013, the landscape was absolutely incredible but anytime I am close to the coast I feel 'home'. It's a shame this water sign was born in the Midwest because my heart has never truly felt at peace here, I'm far to restless and high strung but man...I get to land's end - where sky meets sea - and it's a deep breath in and I can almost physically feel the stress leave, my shoulders relax, my mind clears, and all I see is...
the deep blue staring back at me and in that moment...I am free 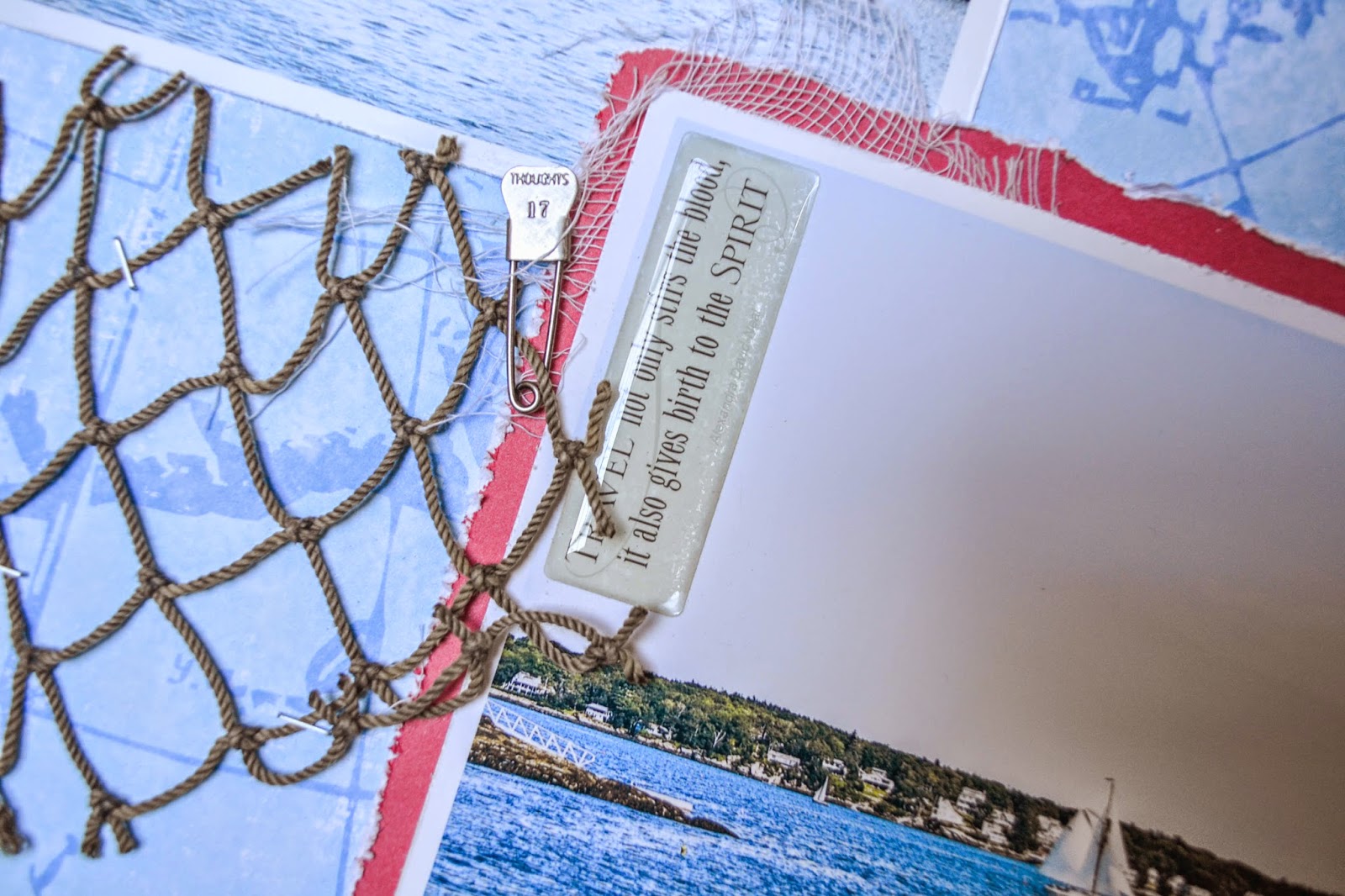 for the layout I decided to stick with something simple because I wanted the photos to be center stage, now granted they do match the back ground extremely well which is why on most of them they have the red photo mat behind them, I like that bright pop of color in a mostly blue landscape. Also in this layout I used some fishing net (which I attached using the tiny attacher this  and this by Tim Holtz) because I wanted something tangible and this was the least bulky item that I had on hand aside from sand, which I didn't even think of until just now but I may have to go back and add on since I did just think of it. I also added in bits and pieces of cheese cloth that I tucked up under a couple of the photos, I did this mostly to add some texture and give interest. I did have some sea shells but nothing small enough. 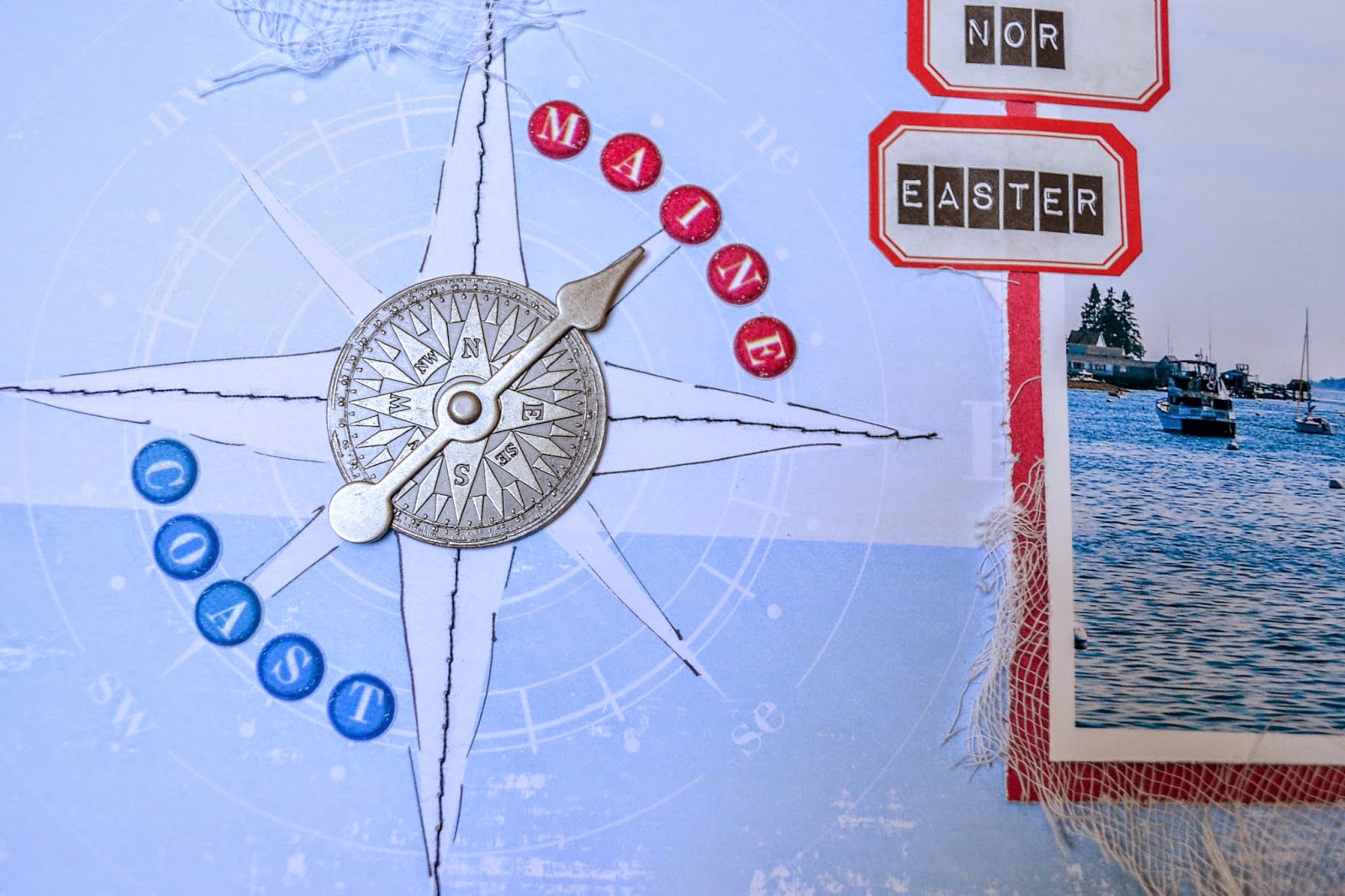 Another piece I added was the compass with a spinner on the top, I absolutely love travel theme scrapbook products - probably have way more than I'll ever use since we don't get a chance to travel to much - but I won't stop buying them. When deciding where to take my 40th birthday trip I almost literally flipped a coin because I couldn't decide between the West or East coast. I finally decided on East only because I had never been that far East before and I have spent a fair amount of time (for me) on the West coast, we were married @ Heceta Head Lighthouse on the Oregon coast in August of 2004 and then in 2008 we spent a few days in San Diego right off the boardwalk so...
Maine it was. Besides something about the East Coast feels like nostalgia America to me, but I can't put my finger on it enough to explain further than that. 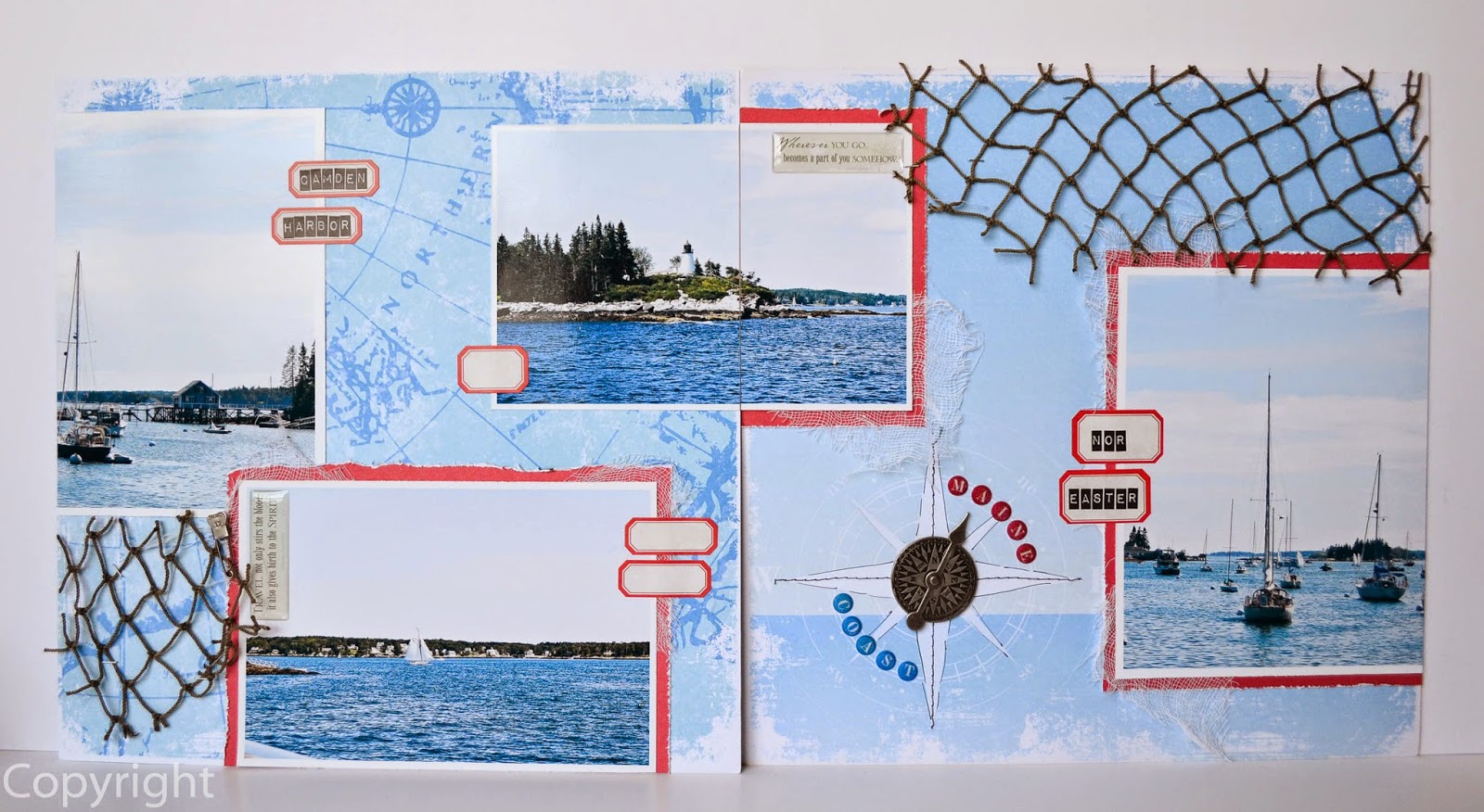 Anyhow, I added my title - complimenting the graphics on the paper, a couple of sentiment stickers directly on the photos, a few descriptive words overlapping each of photos - need to add in a few more and then... well...it's pretty much done - oh and the sand no doubt - I don't want to forget 'that' now that I thought of it, of course where to put it might be a dilemma. Hum?
Well I hope you like this and if you have any suggestions as to where the sand should go...I'm all ears...lol
Thanks for coming by, later this week I'll be sharing what my newly turned 5 year old wanted to do for her 'grown up' birthday party...that oughta be good so swing on by later this week and hopefully I'll have that posted.

Until next time
Keep calm
&
Craft On