Hello Hello
Welcome back again...
and again I apologize for the late post this week, lots going on around here. We are gearing up for the holiday crafting season and I am trying to get lots of prep work done before December because this year I really want to focus on making our Christmas season memorable (and not getting behind in my December Daily) not saying that it isn't - it is Christmastime - but - I am tired of the hustle and bustle and everything seeming to be 'last minute' so...this year I'm going to avoid it at all costs. I have a majority of our Christmas shopping done...yes...you heard me correctly...it's done for the most part with maybe one or two things left to pick up and the Advent calendar I really wanted to do last year is finally coming together for this year...more on that soon...and last but not least I made the mistake of checking Pinterest before getting the girls some Christmasy crafts (part of my advent calendar)...
OMG...
yeah...lets just say I may have gone a little over board...
and leave it at that! 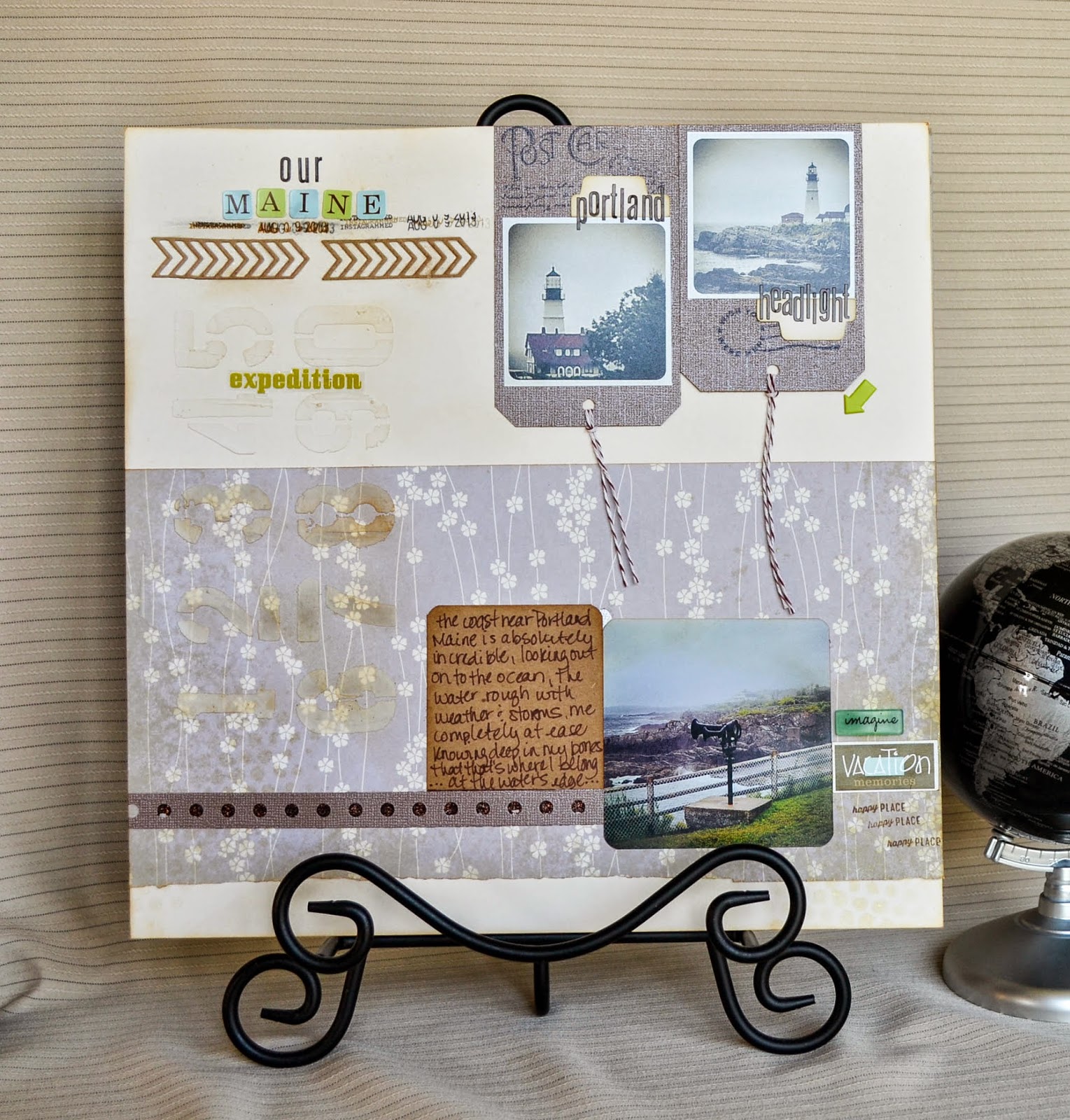 So for today we have finally come full circle with my layout binge from, ironically enough, one year ago today so I thought it was fitting to go ahead and share it with all of you and then I promise no more for awhile because... well...I haven't made any in a very long while...seriously.
And it seems highly likely that I may be sharing lots of  inexpensive(**cough**cough**)Christmasy craft ideas for the kiddos in the very near future besides...lol 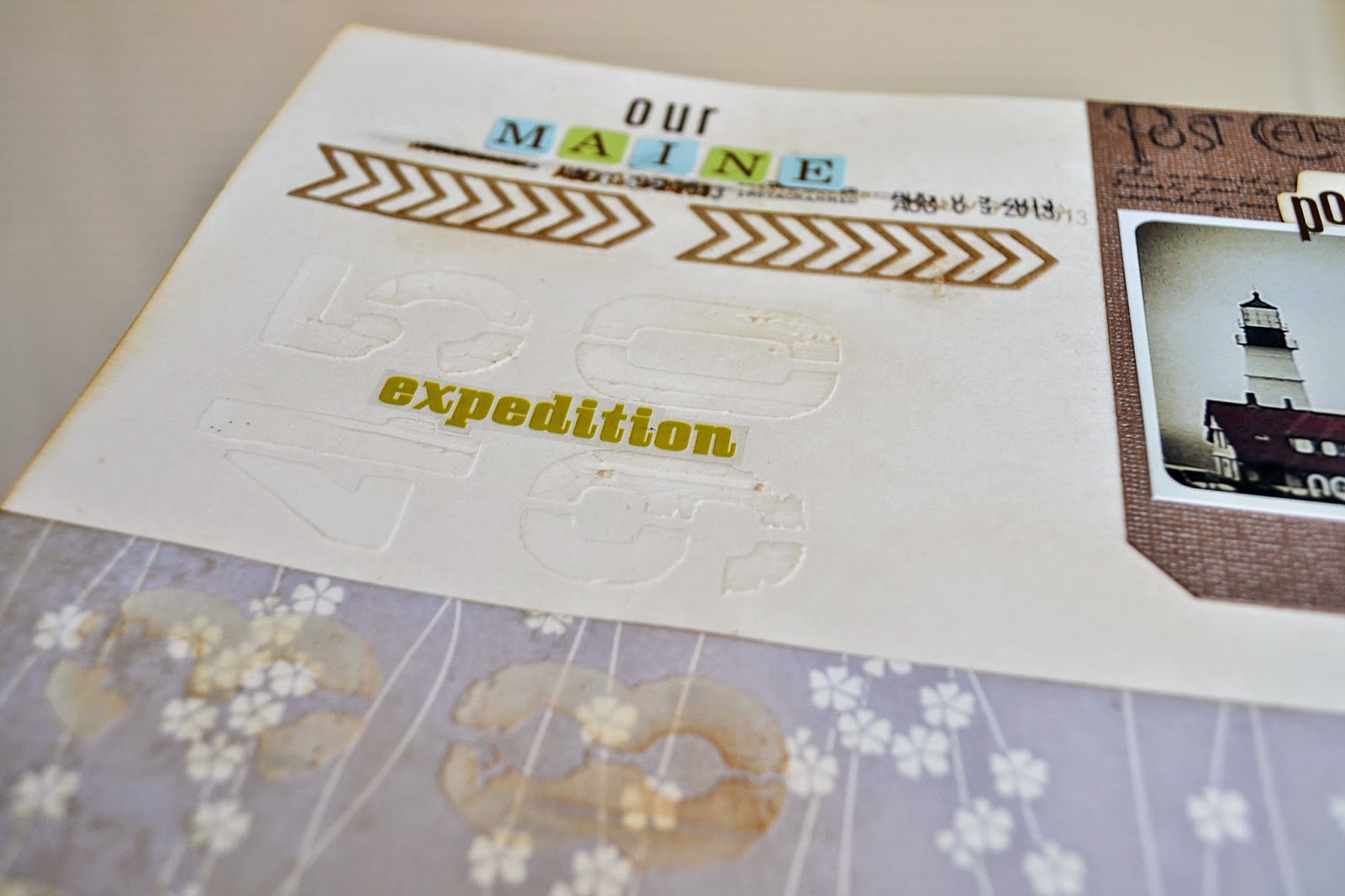 So today's layout I did to document our trip to Portland Head Lighthouse but also to really grasp what draws me to the beauty of these relics and for that matter, to the coast. It is not a secret that my soul is anchored in the deep blue and that my love of the coast is present in my daily life even though I am land locked, in fact as we speak I am listening to Dan Gibson's Ocean Surf which is probably my go to 'calm' if you will (which relates back to my one little word for this year - collective calm)...I could listen to the surf hit the shore 24/7 and it would be music enough and I love music - I did 5 years of private voice lessons throughout high school and into my first year of collage - but there is just nothing quite like the sound of the sea... 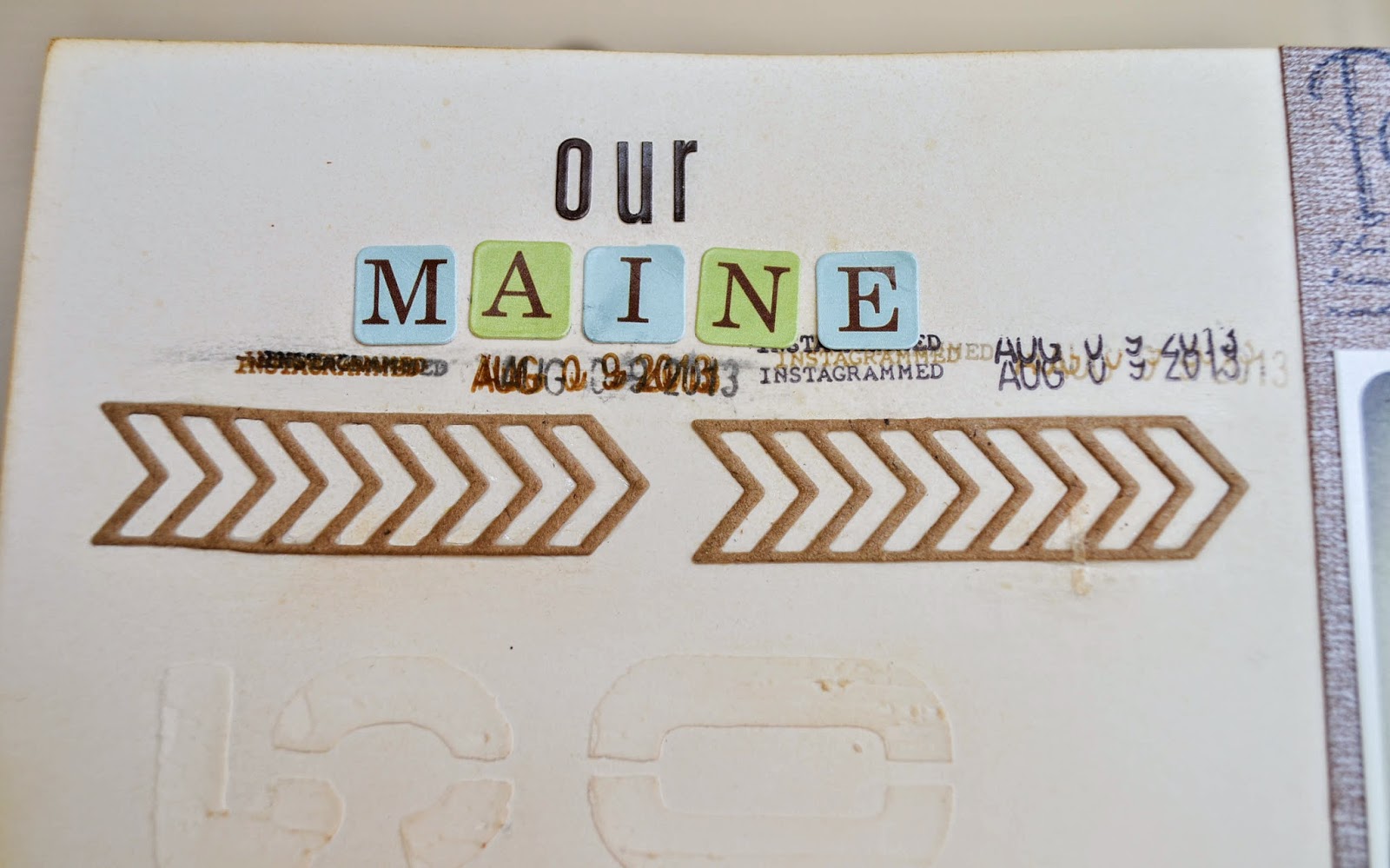 Now interesting enough the day we were able to see Portland Head it was a bit chilly to say the least and spitting rain fairly well too so when I came across this gray flowery paper I just knew it had to be incorporated somehow. It was summertime and the flowers were in full bloom but with the chill in the air and the misty weather it's almost as if they themselves were a bit taken aback so the smaller flower print made it even seem more perfect. I can't say that I recall ever having pattern paper jump out at me as much but it'd sure save me some time if all my supplies would start talking to me...lol 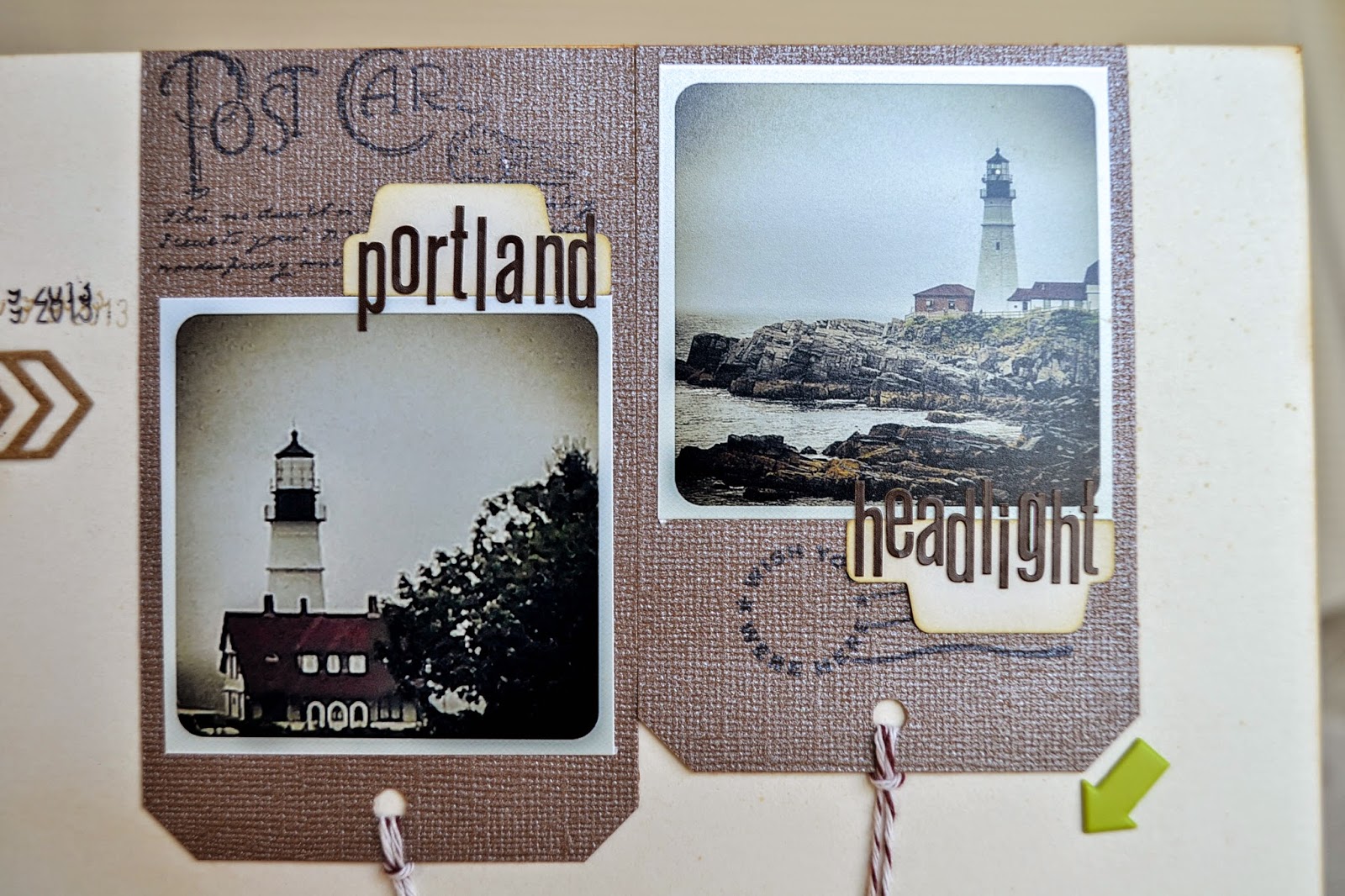 So a couple of things right off... I can't remember how I even came up with this orientation but I like the way it flows, the first thing I notice is the title because it's really the only thing that has color, then the eye travels the way the chevron piece is directing - leading you into the main focal point which is the lighthouse it's self - but then you get to this cute little green arrow sending your eye to an unexpected focus...which for me was the fog horn (though I didn't know it until I was there) and then finally you land on a piece of the story - surprisingly enough I actually have journaling done on this layout...amazing... 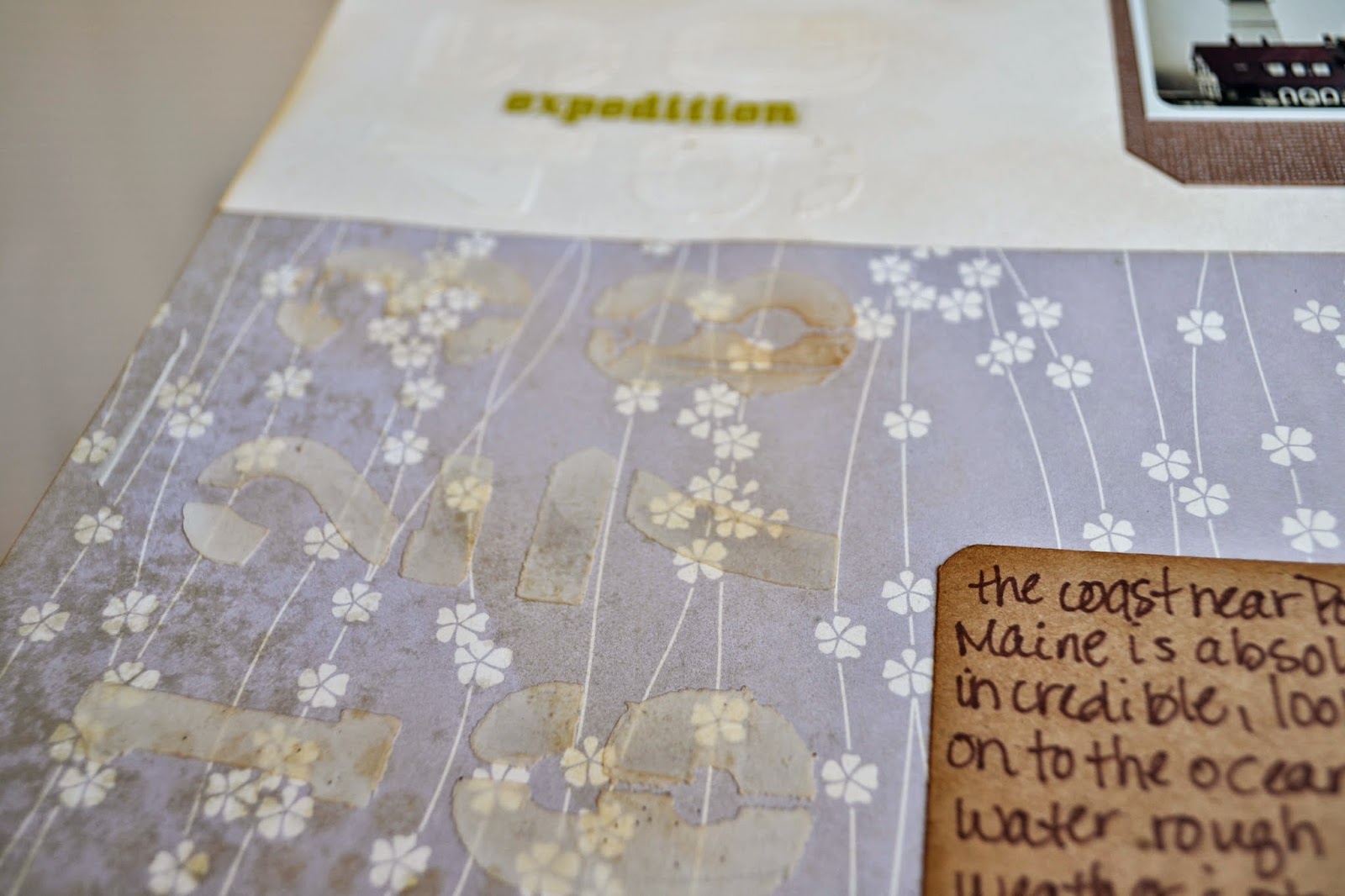 A technique you may to notice from this angle is that I used a bit of stenciling to capture another aspect of life on the lights. I have done enough studying on my own to realize that everything dealing with 'the lights' also deals with numbers... clocks/time mainly and for obvious reasons -> it is the most important. Sailors know the 'Lights' first by their color markings visible by day and then at night by their flash sequence and sometimes the color of the light but numbers also comes into play when you have say...fog. This is one of Portland Head's gems that I completely fell in love with - that is their fog horn and because it is a necessity as well and is deciphered by it's sound sequence, it also has time attached it to and therefore more numbers; so I used this large number stencil by none other than Tim Holtz to achieve the look I was after then I grunged it up a bit with distress ink - vintage photo I think also by Tim. I did do some more inking around the whole layout to distress it also because I like that look but seeing it now I think it communicates the idea of this place being vintage and well...that's certainly fitting. 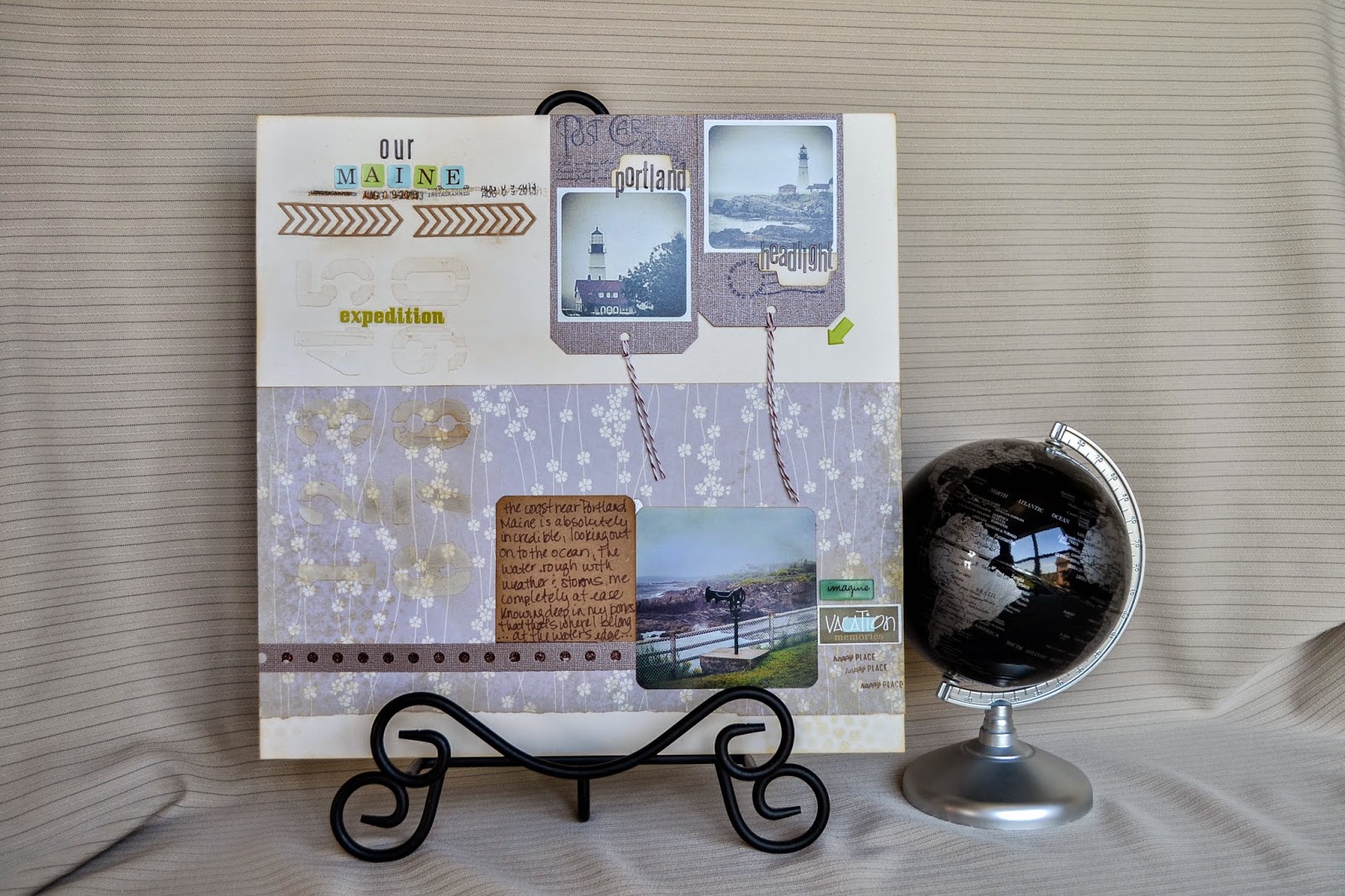 So there you have it, the last 12 x 12 layout that I did in my  weekend birthday binge from a year ago...crazy I know but true...hope you liked it and thanks for stoppin' in. I'm going to attempt to get some recent projects photographed later on today so be sure to check back later this next week to see what's new and until then have a fabulous weekend!
Thanks
just B
Labels: 12 x 12 layout