Hello Hello
Okay so I warned you all that I've been in a romantic mood lately (probably due to the book I am currently reading)
so...
here's another one...
along the same lines...
except this was a wedding gift that a friend of mine asked me to make for her best friend. 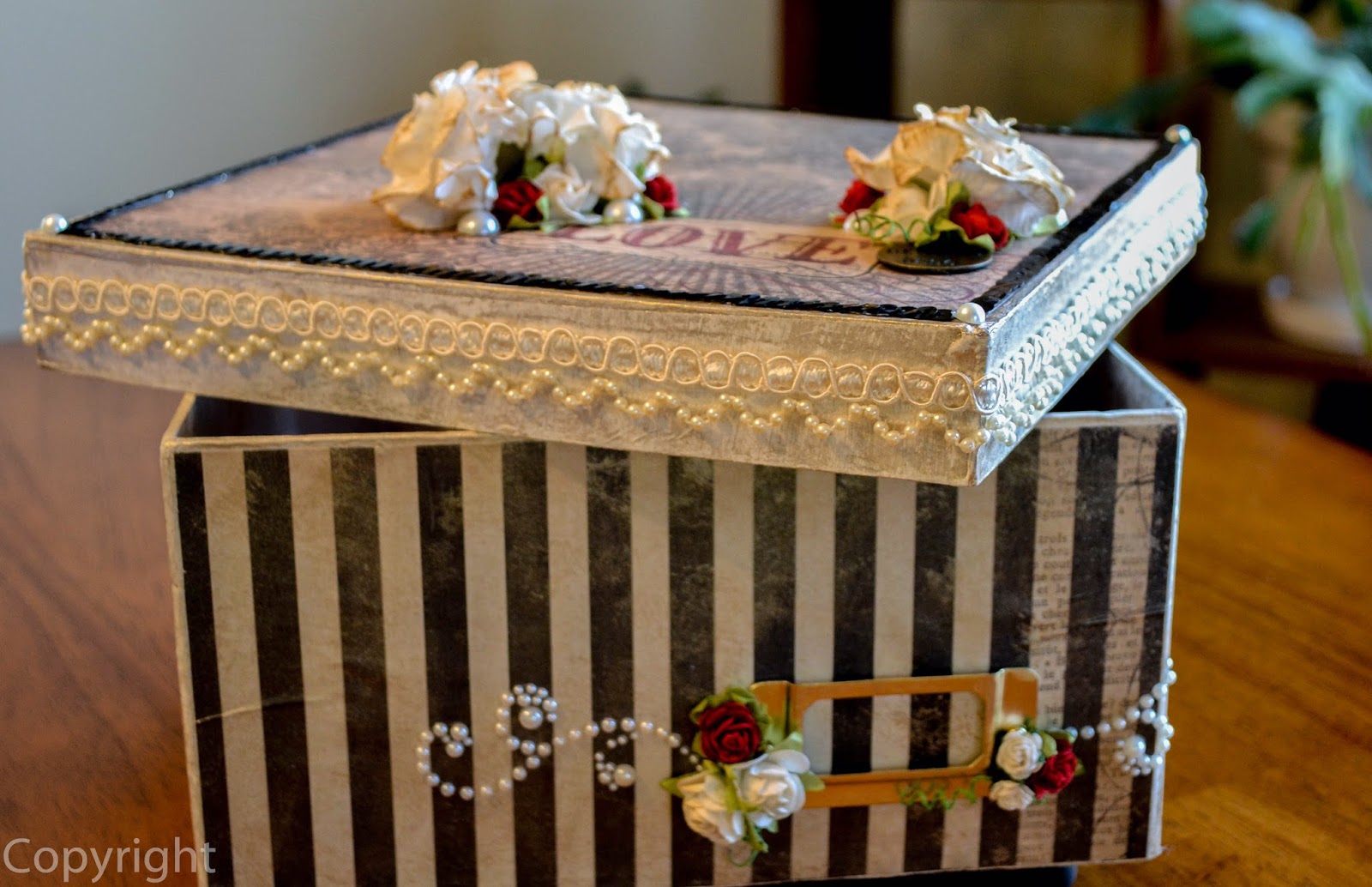 (I sure hope her best friend liked it and is using it)
I was honored as you'd expect.

So this wedding box and album are an older project, in fact I think the couple will be celebrating two years this year so I did this back in 2012. But it is still one of my favorites. 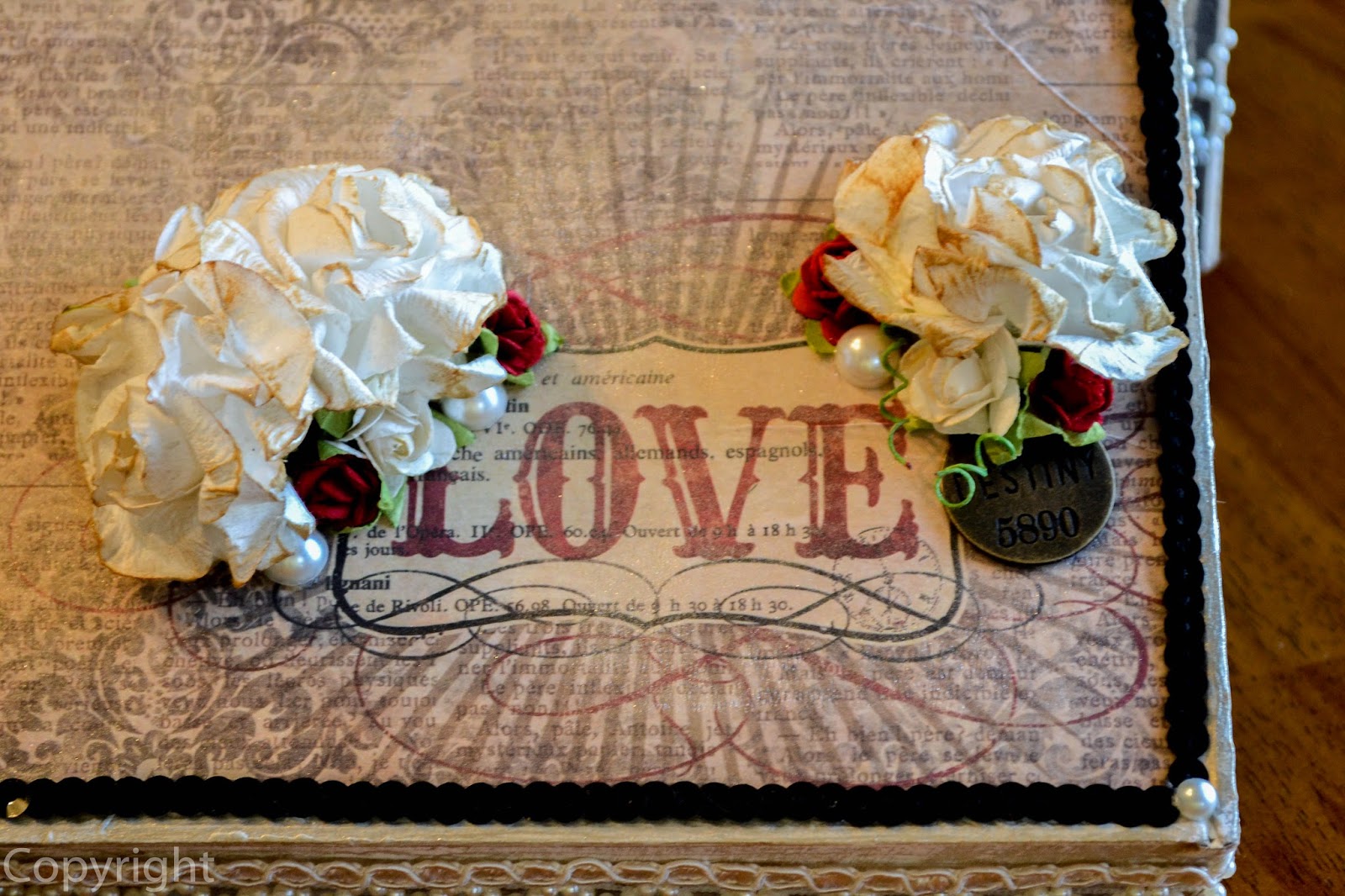 I took a huge leap of faith when I did this project. My friend didn't really have anything specific in mind when she asked me to make something and this was an idea I had had for awhile, so when I pitched it to her...
She said Yes!!! 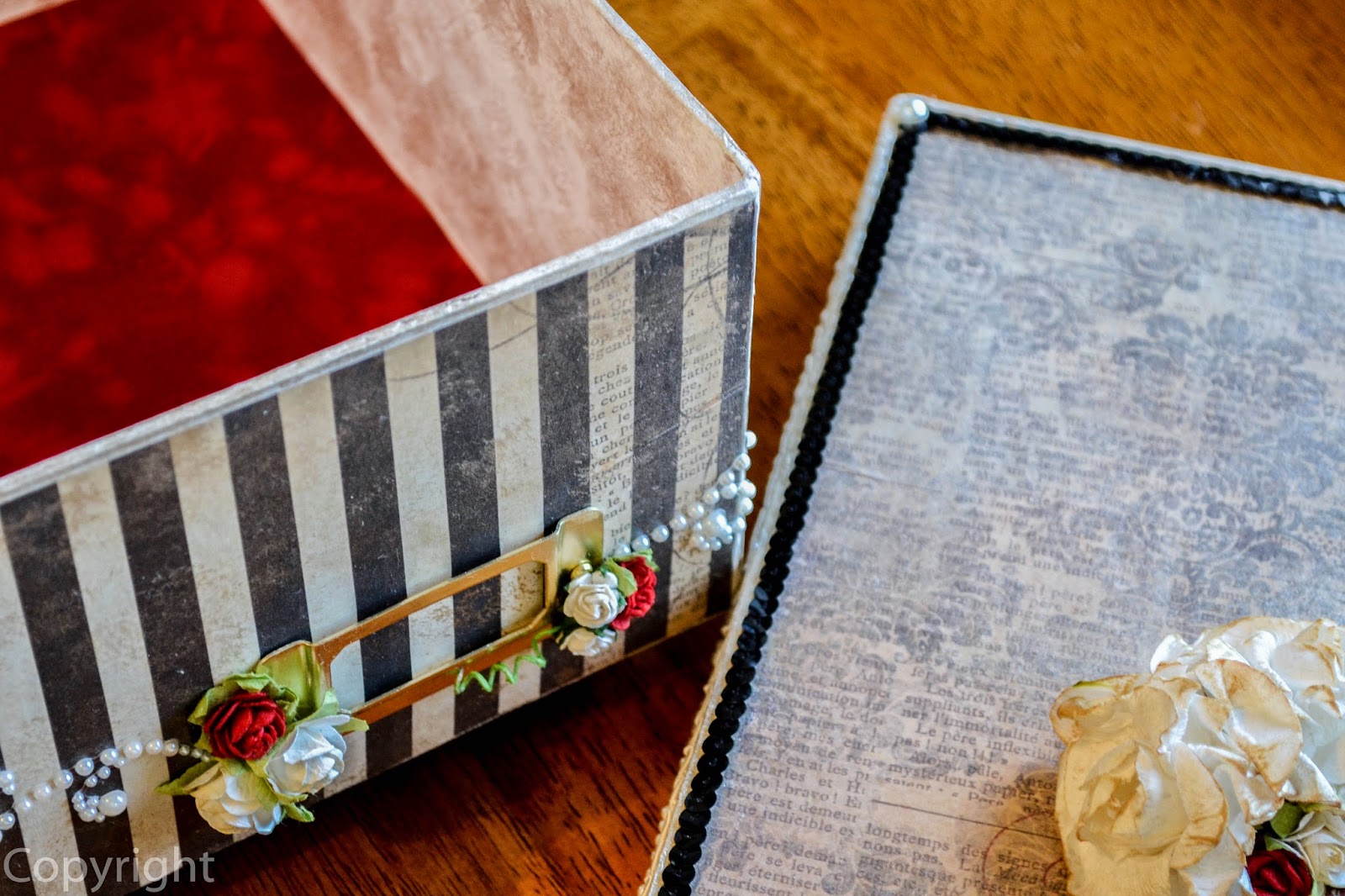 So for the box I painted the entire thing first with gesso let it dry then I used a metallic glaze and sponge painted the entire inside. For the outside of the box, using the same glaze, I painted just the edges including all four corners. Then I measured each side by it's self, cut my pattern papers to each specific side and adhered them with a gel medium. 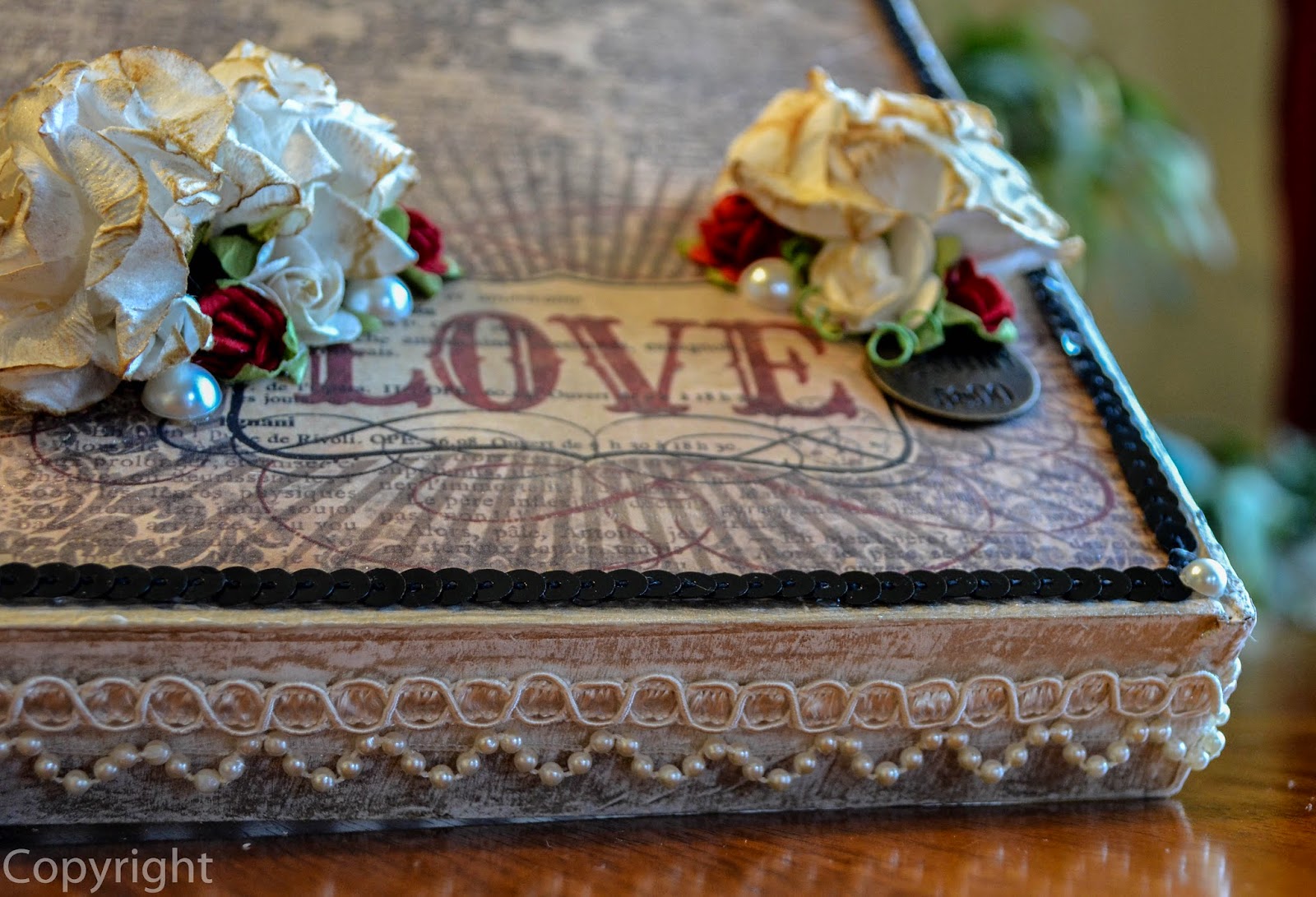 After that dried I went back over the outside entirely with that same metallic glaze that I started with so that it would have that metallic sheen all over.
With a few particular embellishments in place, and keeping in mind not to cover up my word 'love' that I so carefully planned ahead of time, I added in some details around the whole using paper roses and pearls. I also added a name plate where I added their wedding date. 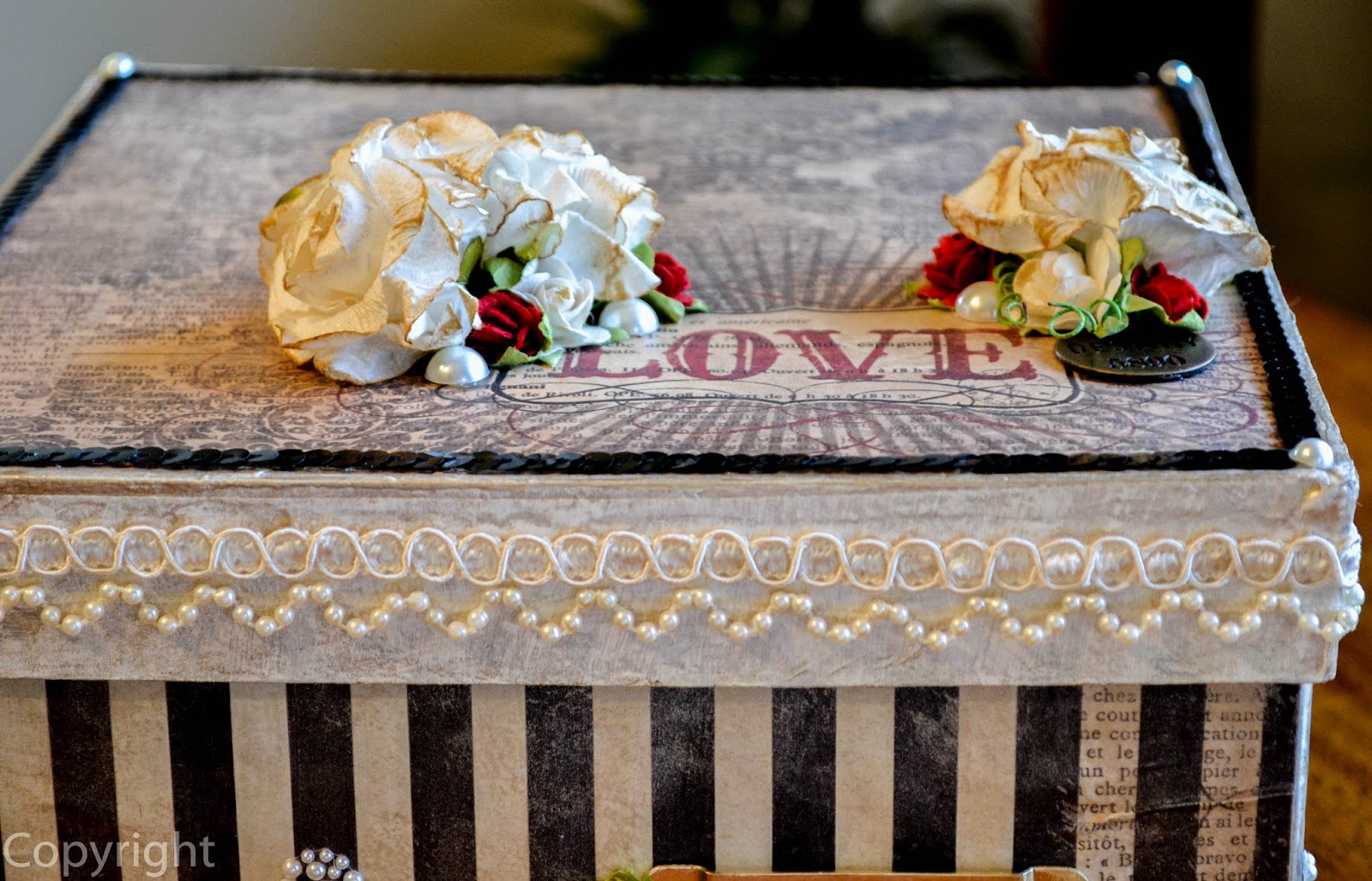 On the inside of the box I left the sides with just the glaze coat, but for the bottom I cut to size a velvet sheet of paper to finish it off. As for the lid it had the same gesso/glaze treatments done to it but to give it a finishing touch I added the pearl lace trim around the entire piece, that alone completely stepped it up to the next level. 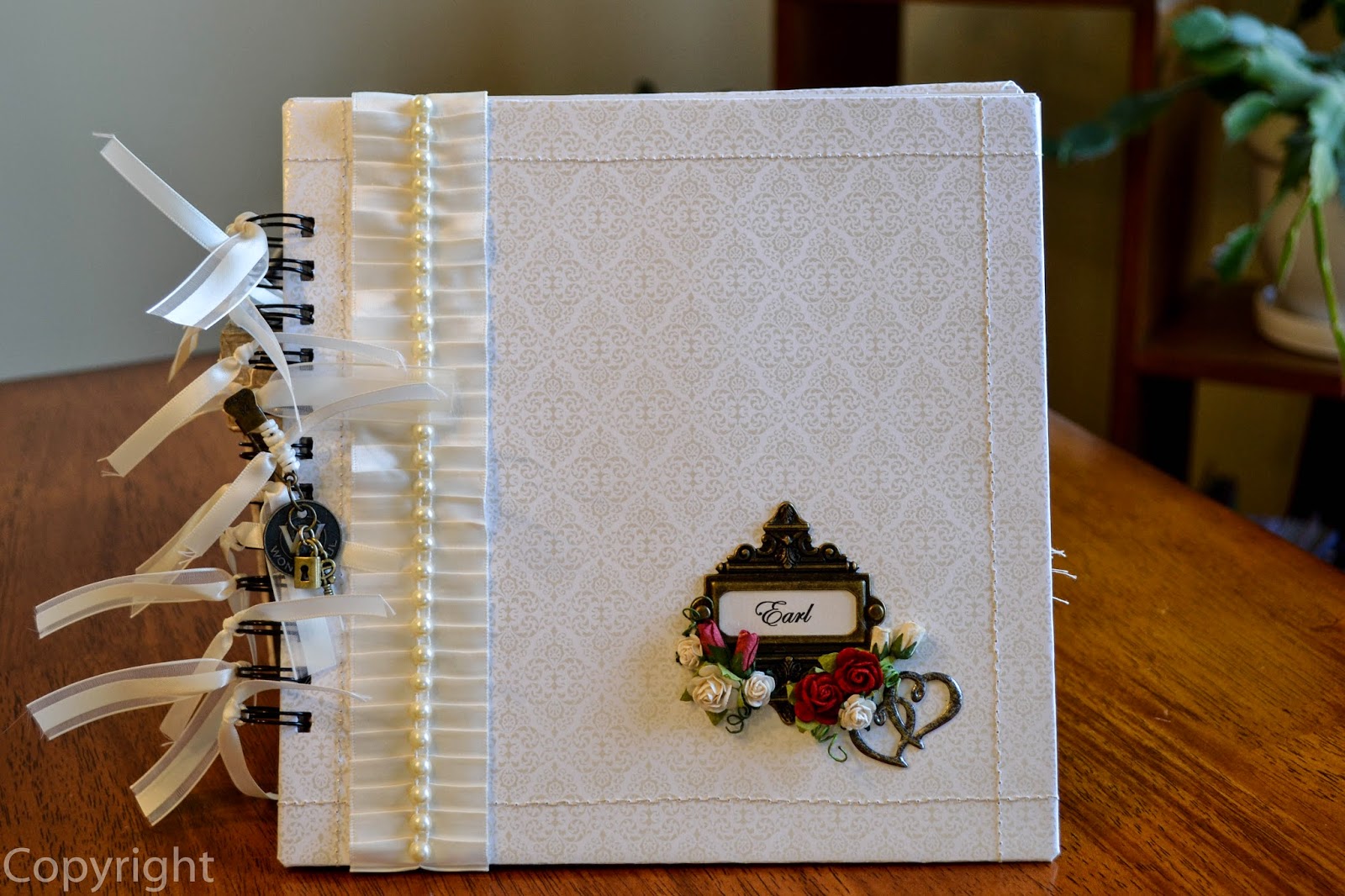 Now comes the album, this is an album that I have made for several friends of mine. It is essentially my version of a smash book... wedding style. I promise you it is nothing fancy but that is it's hidden gem...lots and lots of blank space to add photos, journaling, ephemera, ticket stubs, receipts, love letters, etc. 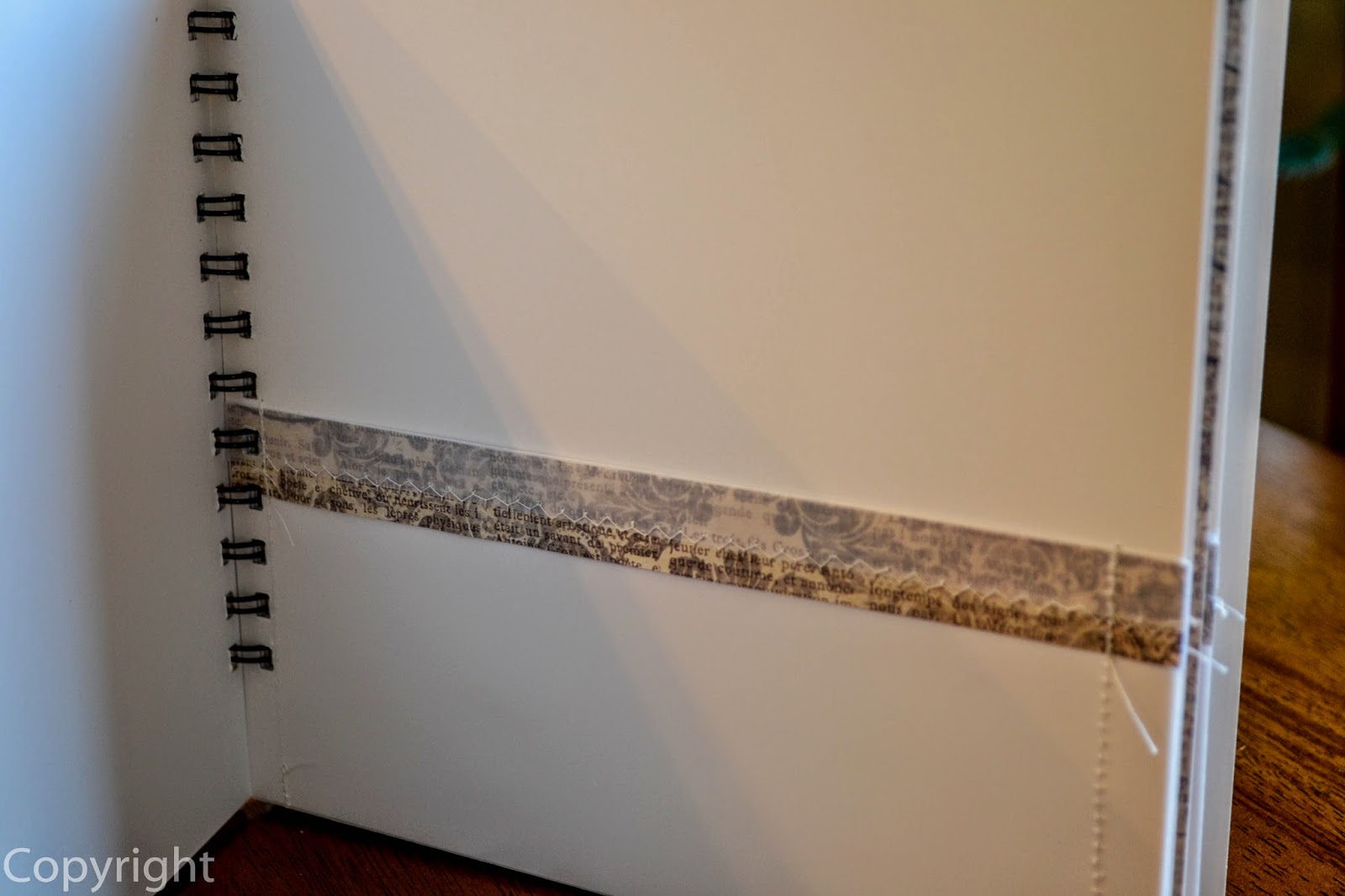 In this version I did happen to shake things up a bit and make a couple of adjustments, for one I added in a pocket page and then I gave two pages a side photo tuck. Now I realize that maybe confusing, but really all it is is a pocket just along the side instead of at the bottom and it's not as deep as it would be if it were at the bottom. Hopefully that's simple enough to understand and clears up some confusion. 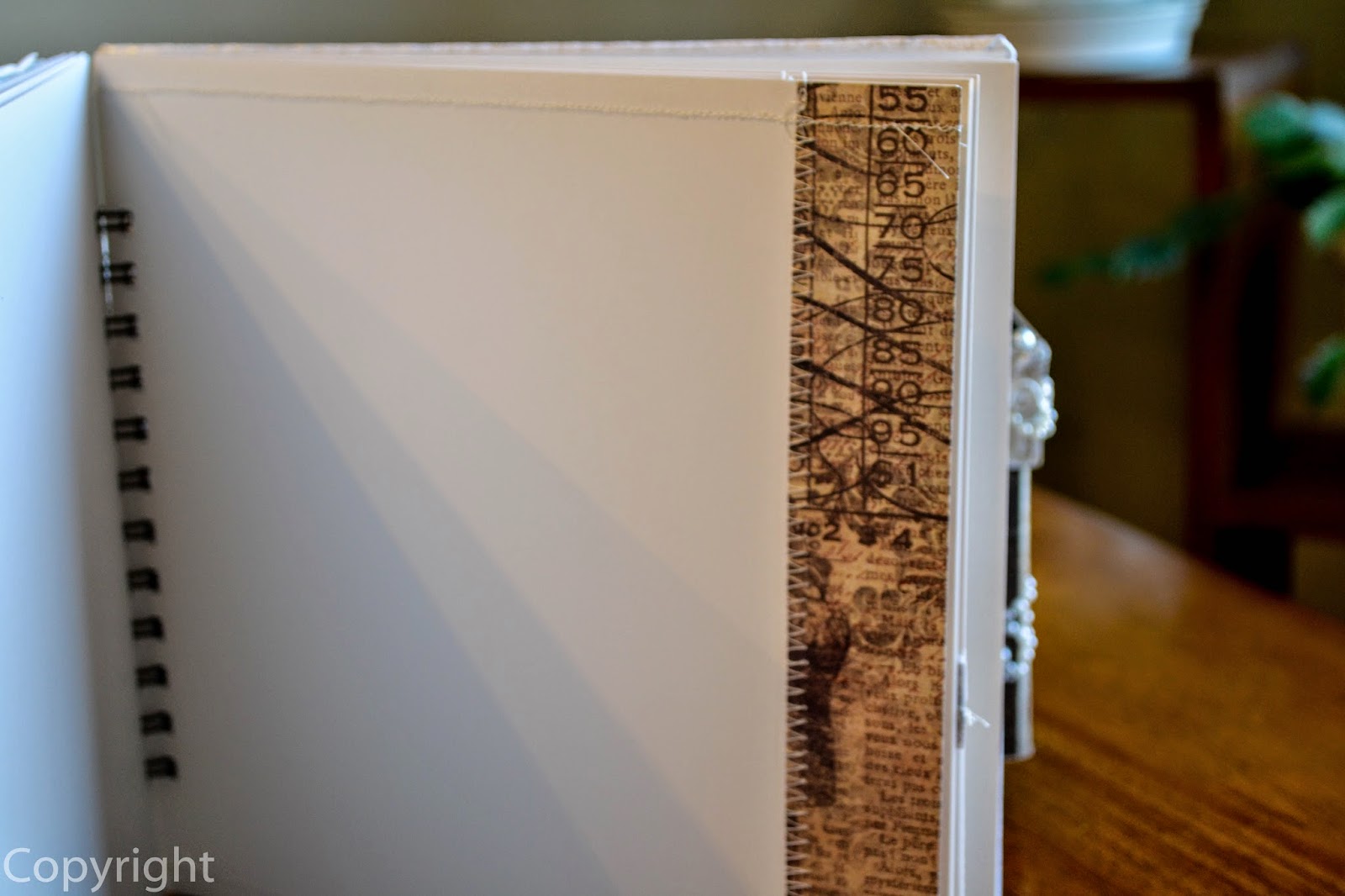 One of my favorite parts of any album is decorating the cover, be it the spine or the actual cover doesn't matter, it's all fun. So for this I used a couple of Tim Holtz's Ideology pieces and made my own charm to hang on the spine. The trinket pin says 'treasure' and the philosophy tag says 'wonderful'. 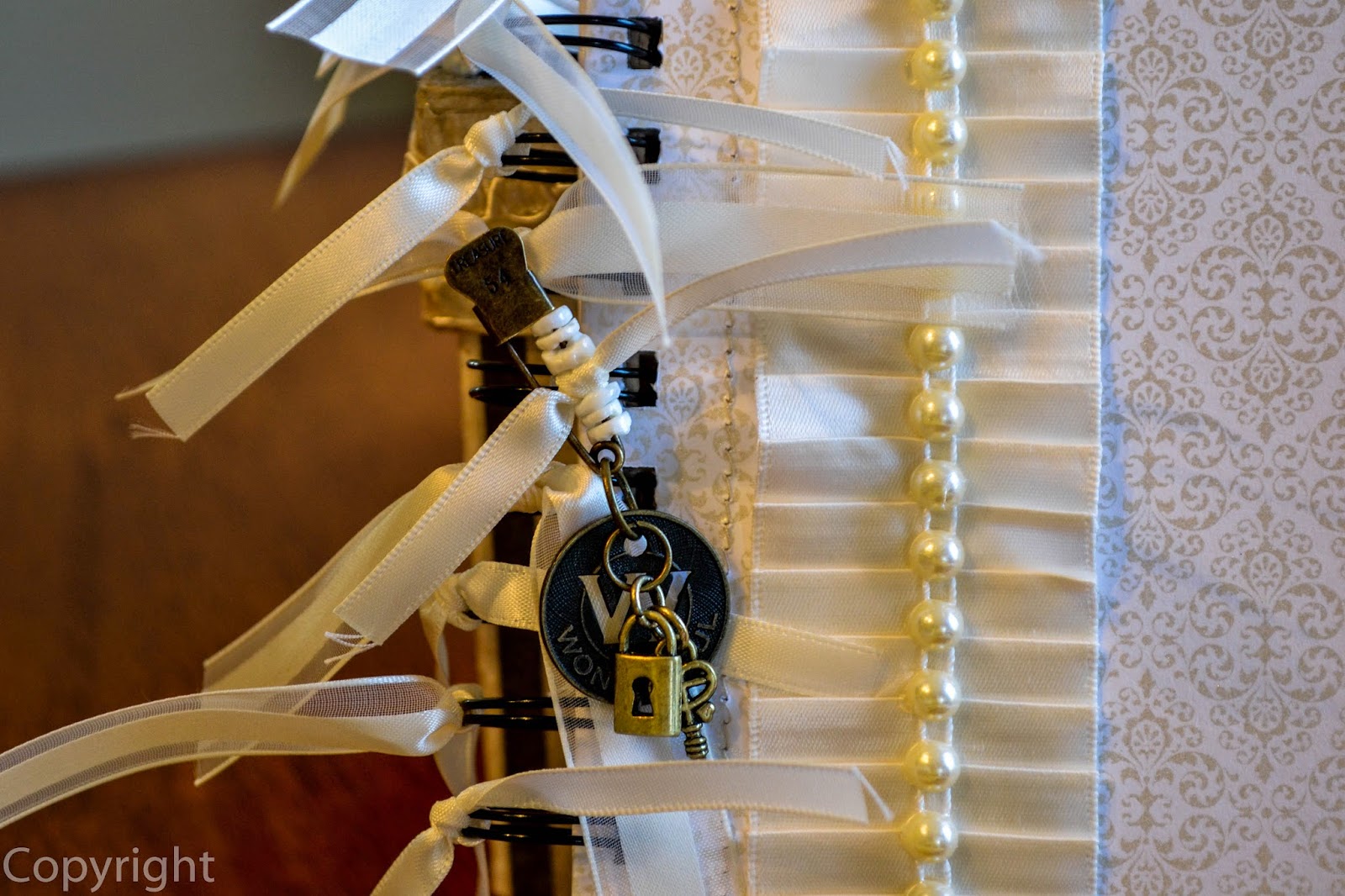 I love adding the lock and key to wedding albums too, it serves a dual purpose for me, the romantic notion is that Prince Charming has come and unlocked your heart, and then there's the man's version that they are now a 'prisoner' under lock and key.
(hahaha - funny huh?)
To which do you subscribe? 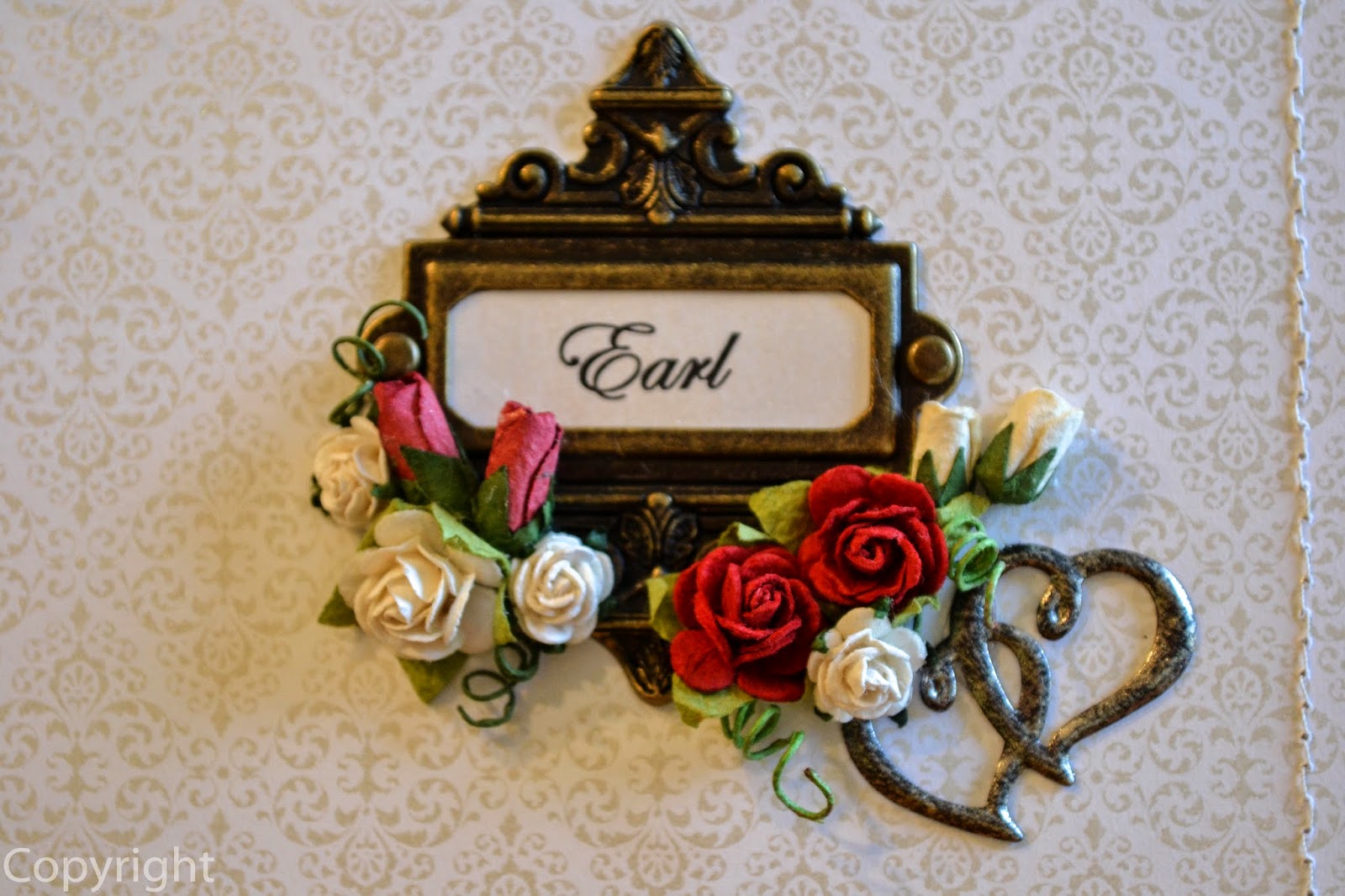 To finish off the cover of the album I added a name plate to it as well with the couples name in script. I added some flowers and embellishments around and decided it was done...beautifully I might add.

This type of project, although time consuming, is really outside the box (even though it is a box) and the wealth of experience that comes with doing a project like this, even if it's a complete fail, is still so worth the effort. I challenge you to give it a go, see what you can create.
Thanks for stopping by, hope you enjoy the rest of your week...
until next time
just B