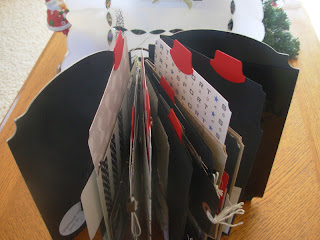 Hello everyone!
I promised that I had another Christmas project to share and so without further ado..... 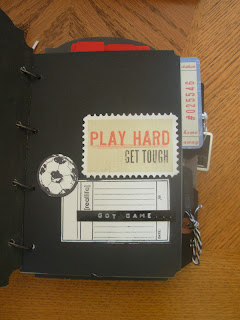 Here is the Soccer album that I made for my nephew.  I have to say that this kid is super talented when it comes to playing sports, he has done about everything out there too.  His personal favorite is golf (another album that I just finished for his birthday & will share soon) but as a Freshman in high school making the Varsity soccer team, let's just say he's really good at that too.  Aside from being super talented he is also super nice (which makes him really really popular), the fact that I was able to make something special for him makes me happy. 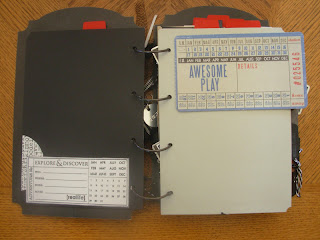 Now I have to admit that even though I played soccer as a kid I don't remember a thing so doing this album (or any sports) was challenging.  My biggest fear was that he wouldn't like it for whatever reason (he is 14-just turned 15) so the way that I went about this was to use Teresa Collins' Sports Edition II here along with the chipboard covers that complete this collection.  I liked the bold color combination it felt more masculine.  Next I grabbed several 8 1/2  X 11 card stock papers that matched some of the patterned papers within the collection and folded them in half making them 8 1/2 X 5 1/2, using my ATG gun here to make those folded half pieces into pockets, I taped down one of the shorter edges and also the longer edge leaving the top open to insert another tabbed piece of card stock.  For the tabs @ the top of each pull out tag, I used my Stampin' Up round tab punch here and adhered them using a double sided red liner tape here. 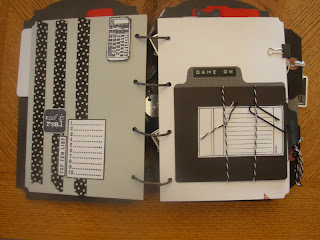 As for the pull out tags I used mostly solid colors with only one or two being a piece of the patterned paper, I didn't want to waste the patterns for something that wouldn't really get seen a whole lot so I saved those for within the book.  I also added lots of other product to this album most of it coming from my stash just to fill it in.  I have a really hard time with just paper, even though I love paper, I want my albums to have some kind of interaction with whomever is taking the time to even look at it - kind of like it's their reward for 'stopping to smell the roses' in a manner of speaking. 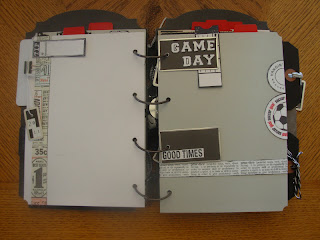 So for this one I did anything and everything that I could come up with just to make it fun and interesting.  It has so many photo holder options too which is good and lots of room for all those game schedules.  There are things that flip up & pull out, there are pieces that slip in & slide out, there are hidden journaling spots & not so hidden spots, there are tags that hang off and of course those big tags that hang out within. 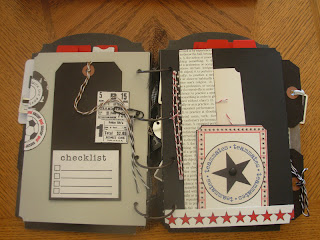 I decorated the pages as much as I dared - there again it is for a teenage boy - and I didn't want any part of it to look 'girly' so I didn't add any kind of ribbon except for what you see on the book rings and even then I kept those within the color frame of the rest of the album.  Throughout the inside of the album I'm pretty sure I only used twine - either a red/white combo or black/white combo here.  I did use quite a bit of the black/white polka dot smash tape here and several black paper clips that I found @ Staples a long time ago.  I figured both of these last two items were as generic/masculine as I was going to get. 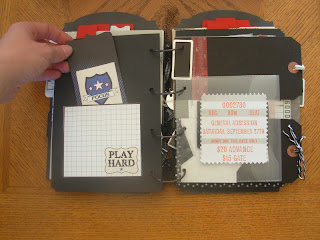 I had also found several stamps within my stash that made for good ephemera pieces, so I stamped them out on white card stock with black archival ink here (this is what I used-had no idea it was discontinued but if you do a Google search it'll bring up lots of other options), cut them out & inked the edges with the same ink and then added them in. 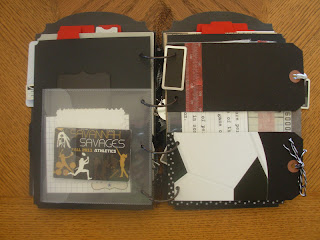 Another element I used was a clear CD envelope because I thought that it would just be cool - I like that you can see the sports schedule but not actually touch it until you pull it out and take a peek - one of the many interactive elements that I enjoy myself as I look through the album. 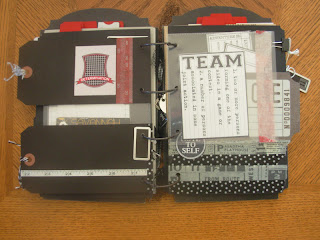 I then found some of the #8 tags that Tim Holtz here is known for altering here in black instead of the tradition manila and so I opted for adding them in as well. 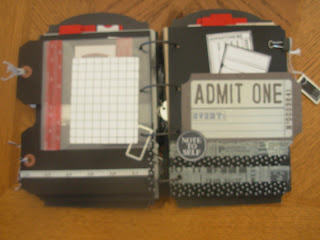 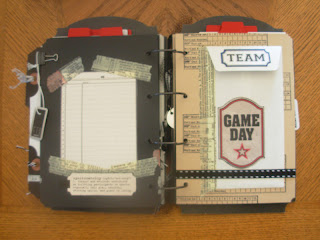 The last way I added another pocket to the pocket page was to adhere a large coin envelope to the page - again I just thought that it was cool. 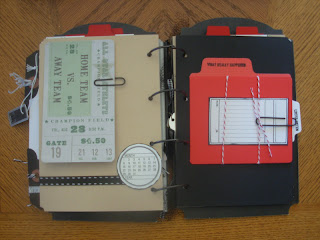 In this ^ ^ photo ^ ^ I did add a mini file folder (the second one within the album) with photo mats inside, a journaling spot on top, and one of those hidden spots off to the right side. 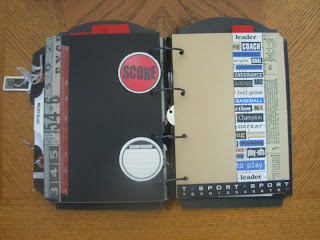 So that's it my first ever sports album and I like it - a lot!
I have to report that my nephew really liked it too - so much so that he asked me to do a 'Golf" album for his birthday (which I just finished about a month ago) I will be sharing that album with you soon. 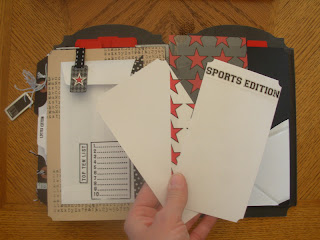 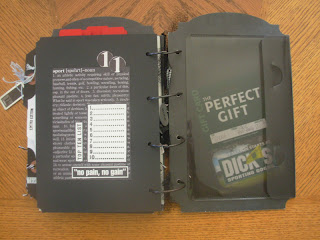 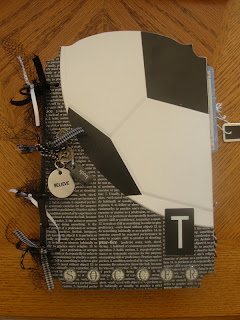 Thanks for stoppin' in and taking a peek - I so enjoy doing this and even more when I know that others like what I do so please leave me a comment or if you have any questions I'd be happy to chat with you.
just B.......
Labels: gifts to give Scrapbook Album sports album