love is in the air 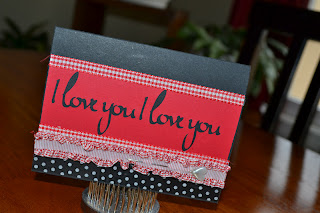 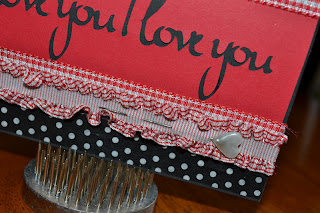 But I had to share what I made for 'you-know-who' and oh I do hope he likes it. 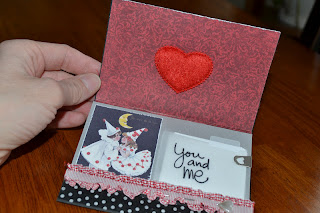 I always fear that what I end up with is a little too girly for him, 'cuz it never turns out quite the way I envision it in my head, but it's the thought that counts right? 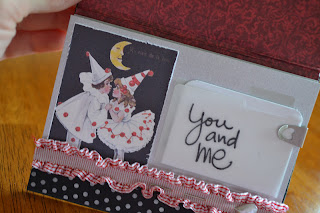 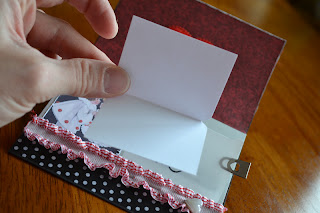 (hidden love note)
Okay then, so this is what I made for him.  It's a match book style card...least that's what I'll call it.  I grabbed a book of matches and made the card like that, except I re-scaled it to make it quite a bit bigger - I think the finished size is 5 by 4. 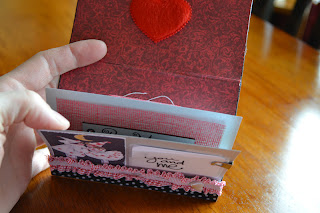 (a peek from the top)
I gave his card 2 pages so that it wouldn't be so thick & then not close properly, the whole idea is that the top flap can tuck into the front like a book of matches. 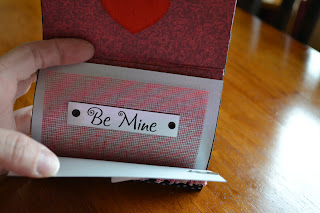 (the second page)
The top page is the one you see in the photo (4 up) with the two little figures leaning in for a moonlight kiss with the phrase, "Au clair de la lune" written on it, to the right of the image is a vellum file folder where I tucked a little love note.  The second page simply says, "Be Mine". 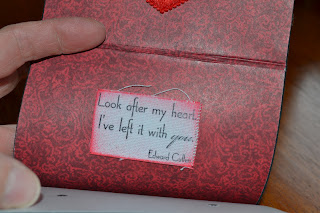 (the back page)
At the very back of the card I stamped the quote, "Look after my heart, I've left it with you" - Edward Cullen.  Besides being a new stamp, it is totally fitting for Valentine's Day and (in my opinion) The Twilight Saga is one of the best 'love stories' ever written (not that I've read that many but...... I have read the entire 4 book series 3 times I think so...).  In fact the phrase from earlier somewhat relates to Twilight also, because the instrumental piece: Clair de Lune by Debussy (a favorite song for both) was the first thing that Edward realized he & Bella had in common, so of course when I saw that image - I HAD to use it!
Okay so now that I've gotten completely side tracked, there you have it, Mr. Man's <3 card.  Hope you like it and I wish all of you a very H-A-P-P-Y day!
Thanks for sharing with me...
just B