Hello again! I finally got some photos up from the Creating Keepsakes Convention that I went to earlier in the month. Eventually as projects and layouts get finished I will show you what they look like completed. Starting off our day (my friend Angji and I shared the whole day together) our first class was "Everything..." sponsored by The Angel Company. The photo below gives you an idea of the book we made in the 2 hours we had. This class was definately my favorite of the 2 we took simply because of the project & the instructor. Not only did we have a finished album in 2 hours the lady that taught the class was very friendly and very laid back. She encouraged all of us in the class (around 40 or 50) to just relax and enjoy trying something beyond our norm and the final result is really cool. She had all the paper pieces we needed already to go and had the order of the pages lined up the way that she'd be showing them, there were a few times that certain pieces didn't get into the class kit, she had plenty of extras on hand for that, then also had a couple of teachers aids to help if anyone had questions. She had her book there but like I said was so encouraging to mix it up to how it would fit us, loved that! Anyways I finally finished my mini album this last week with different photos than I originally intended and so I'll get pics up of that soon. 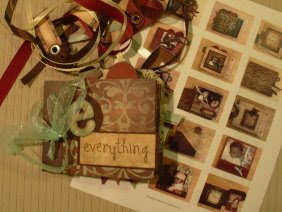 The second class we took was "2008 Latest & Greatest w/Basic Grey" sponsored by Embellish It! Although we got to do 4 layouts that challenged both of our styles (mixing things up is always good) we were both disappointed in the class. First of all when you tell me latest & greatest I'm thinking felt, acrylic, die-cut papers, sheer papers, anything clear.....and well it wasn't any of that. Our very first layout was in fact: cardstock (ok that's a given) patterned paper (ok also a given), a sticker sheet (humm...?), velvet flowers (which were actually the coolest product that I got from the entire class), and finally button brads (which were a bit on the cheap side). Not really what I thought I was signing up for, but we went with it, you never know. Then on top of very basic products the layouts were only single layouts (not two 12x12, only one 12x12). The last thing I'll say about it is how poorly it was taught. When the instructor opened her mouth 10-15 minutes in and basically said; I don't care what you think, do what I say because it is MY class!......WHAT?!! How rude! Granted I'll give her the fact that there was probably 75-100 people in the class and I know some really STUPID questions were being asked; but I think that if you tell people what they need to know about a certain part of the layout process and then maybe repeat it, that should be fine. If their layouts get screwed up then that's on them for not listening, still no reason to be rude. Anyways, Angji & I both were put off by her so we did the layouts 'exactly-like-she-said' (Yeah Right) and then went on our merry way. : ))

As I mentioned, in the class we only did single layouts, but for a little extra you could purchase the supplement pack inside the expo @ their booth, which I thought was cool that it was offered. Angji & I both agreed for any of the layouts to ever really 'work' for us (being they were not our style at all) we'd have to have the additional layouts to match, so we went for it. It's a matter of expanding horizons, even though we weren't real crazy about any of them, that kind of thing. Anyways out of the 4 layouts, my favorite is the 'Halloween One' (2nd photo down). Speaking of photos, those below are of the 4 layouts that we did in class and then off to the right is the supplement layout that matches. Once I get all 4 done then I'll post them so you can see how they turned out. 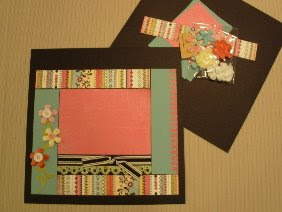 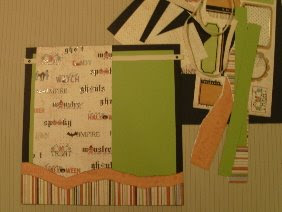 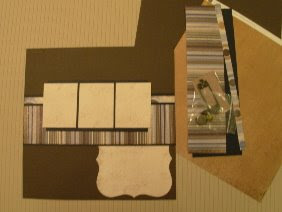 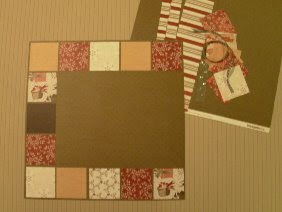 The final photos are just of some of the things that I purchased while @ the Expo. As you may see there is a couple of the inks I like, a couple of new stamp sets along with a couple of new roller stamps, then there's the extra large flowers that have been a long time favorite of mine, and a package of brads that are the same color just in different hues. 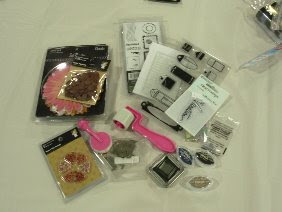 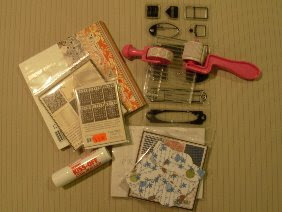 In this photo you see the roller stamps again with the stamp sets, then a 'glue stick' which isn't glue, it's actually a stain remover that I got to clean some of my older clear stamps with (before staz-on cleaner). For those of you that don't know, there are a number of different kinds of ink for stamping; there's a slow-drying ink (which is available anywhere) that works best with: paper, wood, fabric, felt, anything porous because it absorbs it; then there's a fast-drying ink like 'staz-on' that will stamp on slick surfaces: metal, plastic, acrylic, transparencies, etc. and not rub off once dry. I like both and use both a lot, but the 'staz-on' stains the stamp and up until they made a cleaner for it, I had no way to get the ink off, so I'm hoping this will. Also the other things I have in that pile are some 'Jenny Bowlin' papers and bingo cards, then I picked up a patterned paper pack in 6x6 size. I have lots of ideas all the time of what I could do with these supplies and supplies I've had for awhile but until I get the time to do them they just sit. Then when the time does come I have a handful of even newer ideas that I want to do right now, so as you may guess I have a lot of incomplete projects, although I must say I've gotten a ton done this year, the goal for next year is to concentrate on unfinished projects and get them done and then to finish what I start so that I'm not in this same position next year. I figure eventually I'll get caught up......... in about 5 years! : ))

As always thanks for checking in! Hope you are enjoying what you are seeing and feel free to leave me a comment and tell me what you'd like to see in the future, or if you have any questions. I'm still trying to figure out my photo issues, they seem to dark once they get posted, but eventually I'll get it all together. In the meantime........Just B.........in the moment!

{Edit}
I have learned with trial & error that if you are wanting to do some stamping of any kind that the "Staz-On" ink is the best for all projects. It works on all surfaces well and drys fairly quickly so that you're able to move on to other things. In addition when stamping on fabrics the "Staz-On" won't bleed into the fibers like a lot of the other traditional inks tend to do. Just an FYI!