Hello Hello
How is everyone today? I am a happy girl - the sun is shining and I don't have a thing that I have to do if I don't want to and boy is that a great feeling. However I do happen to be catching up around the house today; the laundry is going, my youngest daughter and I are in the midst of lunch as we speak, and later on today I plan to get to my scrap room and get some organizing done-maybe even attempt to do a mock schedule of projects that I really should get done...that'd be good being that most of them have been sitting for quite sometime. 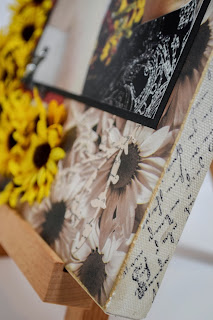 But first I wanted to share this little gem with you before I get busy. My friend who also happens to be my next door neighbor asked me to help her on a project last summer for her mom. She knew she wanted to do a canvas piece, something that her mom could put on the wall so this is what we came up with. 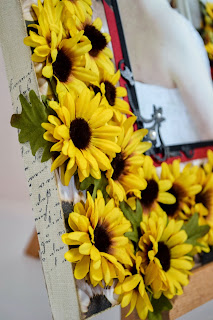 It's a photo of her and her mom on her wedding day. The photo is beautiful but I wanted to protect their privacy so I chose to only share glimpses of the this piece. The canvas is a 12 x 12 stretched canvas and to start we painted around the outside of it with a shimmer paint, then took a script stamp and stamped the edges of the canvas to add some interest. The next piece we added on was pattern paper which happened to be a monochromatic photo of sunflowers in a white/creme tone which is really kinda cool because in the photo there is a huge bouquet of sunflowers (the theme of the wedding was sunflowers in the Fall) in the background and with the Bride being in white and her mom being in a black & white pant suit it fit the piece perfectly. 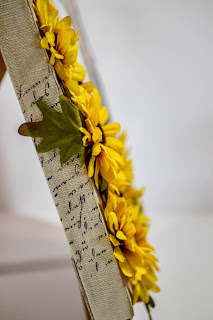 The next layer we added after the photo was the silk sunflowers that my friend had found in her stash, originally she didn't think she wanted them because she didn't want them to distract from the photo but what we quickly realized after playing around with several options is that the sunflowers actually drew our eyes into the photo better and it helped support the overall piece. The photo is now completely center stage as it should be. 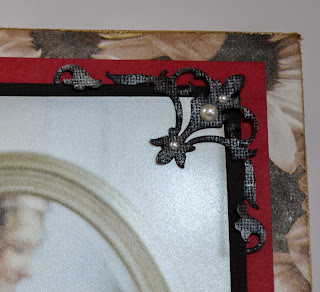 Now that we had all the main elements added on, we did some embellishing; we added in lots of distressing, some bling, some other smaller die cuts as accents...just to give it a finished look. The photo corners (as well as the other smaller pieces) we die-cut using her Circut Electronic Die Cutter and using the black shimmer on top of the two other photo mats help anchor the photo, giving it visual weight...being that is the focal point this was a good thing to achieve or else the entire piece would not have been eye-catching, it would have appeared 'off' somehow and that just won't do. 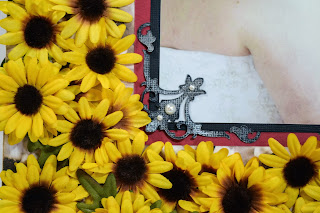 As it turns out, the piece is rather lovely and her mom was completely and pleasantly surprised by the thoughtful gift. To my delight, as an accomplice, I was happy to see my friend trying something outside the lines for her. Hopefully in the process she has been able to grow as an artist and scrapbooker. I love to share, to teach what I have learned along the way, whether it's to inspire others or prevent them from making the same mistakes I have - I think there is something unifying when we create together and join forces if you will. Thanks for letting me share a bit of myself with you today, hope that somehow in all of this chaos you have found some inspiration of your own. Until next time, craft on!