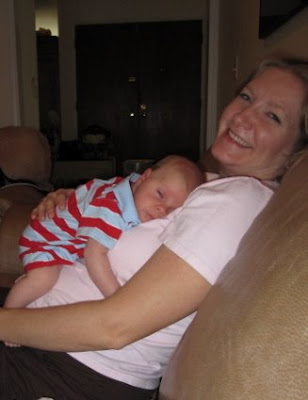 I love weekend getaways and road trips, so over the weekend of the 11th Liberty & I decided to pay a visit to a very special someone . Let me introduce you to William, this is my best friend's little boy who joined the world about 2 months ago, and let me tell you - he already has me wrapped around his finger - can you tell? 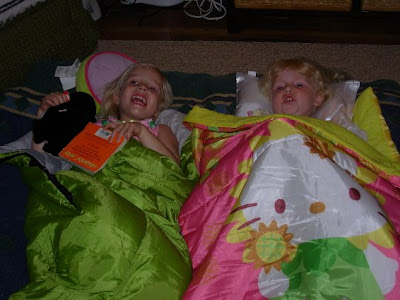 I am so proud of the girls, they did very well together, for the most part. Aisling is a vetern @ sleep over's, but this was Liberty's first, and I am amazed that she slept at all. Even more amazing is that Saturday night, we got them to go to bed @ 9pm and I think they were out @ 9:15....how cool is that.
I was able to relax for a bit while I watched the final episode of 'Harper's Island' - which was greatly disappointing - but oh well. 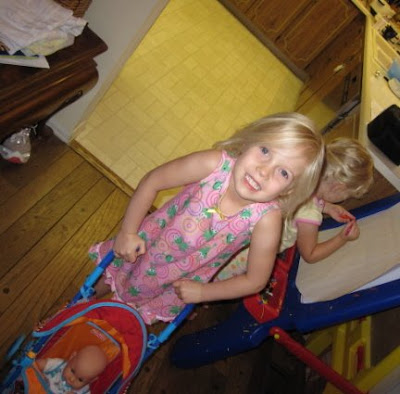 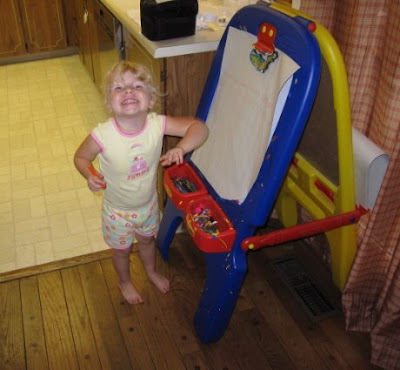 We had a slow morning and didn't hurry to do anything, which @ 5 months pregnant is fine by me. Eventually we got around, after lunch, and took the kiddos to the playground @ the local elementary school. Although a bit muggy, in the shade it wasn't too bad; William & I hung out on the blanket (that Tami thought to bring - yeah) while Tami kept an eye on the girls playing on the 'big' kid stuff. 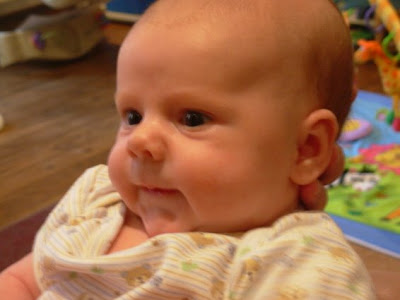 After we got home from the playground, the girls were ready to play in the water, so Tami filled up the pool and let 'em @ it. They played and played - that Aisling is a fish (*note to self - get Liberty in swim lessons) I just know Liberty would love the water that much more if she could put her head under without fear. After pool time, we tried doing sparklers that I had left over from the 4th but they were a bit much and neither of the girls wanted anything to do with them. Probably just as well, they had me a bit worried too, a little to cheap. Oh well can't win 'em all.
After dinner we got out the bracelets, and these weren't just any bracelets, they were glow-in-the-dark bracelets, and they were a hit. In fact after stories were read and teeth were brushed, they were more than ready to go to bed (this was a record time for us...9 pm....wow) and they were even more excited since we decided to let them wear their bracelets to bed, still glowing bright. 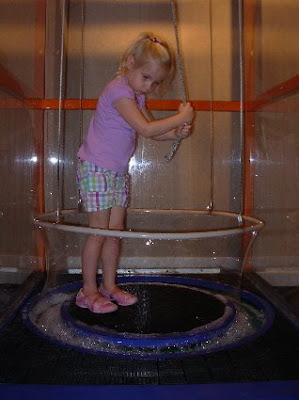 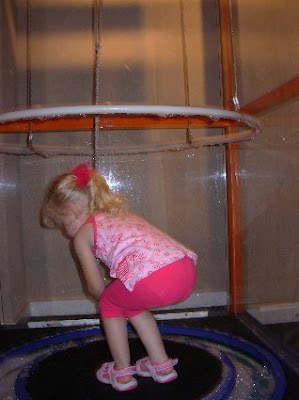 I guess I should have known that there'd be pay backs - after such an early night - the girls were up and ready to take on the world @ 6:30 am....ughh...who gets up that early on a Sunday? Nobody 5 months pregnant, that's for damn sure! But I managed to keep them somewhat entertained @ least for about a half hour before they woke up Tami - of course William did that well enough on his own - but just the same. Once we were somewhat awake, we let the girls continue to play; then while Tami fed William, I helped out finally by finishing the makings of breakfast (Tami has a thing about letting me pay for my keep - like I'm on vacation or something - that silly aunt Tami). 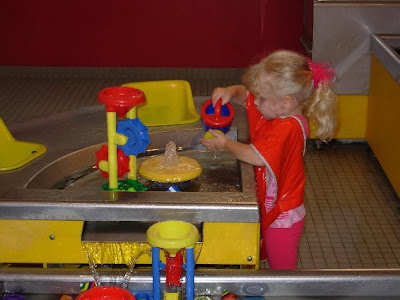 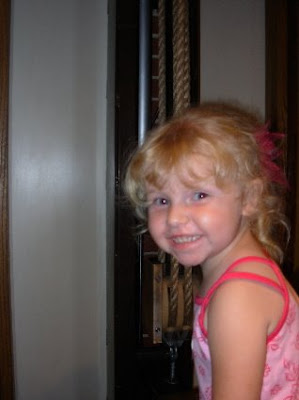 Anyways the rest of our morning and well into our afternoon, Tami & Aisling took us to 'The Magic House". Now if anyone is from St. Louis or visiting anytime soon & you have little ones (roughly 2-12) take them to "The Magic House" this place is awesome, we spent 2 hours there and I'm not sure we saw even a third of it. There is so much for a kid to do and learn, it is crazy cool, I will certainly be taking Liberty back next time we're in town. Sure enough though, after playing hard and running all morning, the girls were hungry so we took them to Mickey D's for lunch, then let them play for a bit before heading home. Unfortunately for me, in order to make the drive all the way back to Kansas City, I knew I needed a nap, so while the girls sat down to watch "Tinkerbell" - I slipped into Aisling's bedroom to snooze for a bit, about an hour later I decide to get up and get Liberty's & my things together. After getting everything packed up, Tami & I took one more venture out....she took me back up to Trader Joe's, now I've read a lot of really good things about this place and I'll tell ya - there's a reason - this place rocks. It's a whole foods, discount grocery store and so far everything I've tried of their's, I like. Can only wish now that they would bring one to Kansas City, I'd be hooked.

Well after several goodbyes and hugs and many, many kisses - Liberty & I finally got on the road. We stopped and filled up with gas - then next thing I know, she's out-yep-not even 10 minutes on the highway and my baby is snoozin' (sure glad I had that nap). We had such a great weekend visiting aunt Tami and her family! Frustrating as it is that we're not closer to each other, thank goodness we're not any further apart. Hope to see them again real soon.