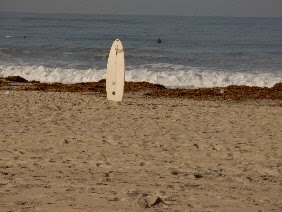 You know you're at the beach when this is what you wake up to early in the morning, because other than surfers, who in their right mind gets up before 7:00 a.m. just for the hell of it?
{Mom I'm voiding your answer right off the bat- that goes for you too mother-in-law ; p} 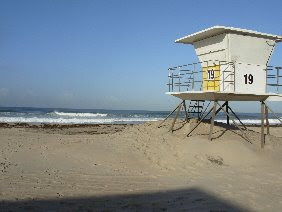 I absolutely love the coast.... 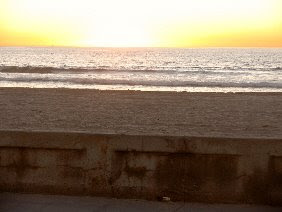 I love the sound of the surf coming in when it's at high tide and the way the sun reflects off the water at sunset with all the orange and yellow hues...then nothing but blue! My favorite is the smell, I love the salt in the air it's almost intoxicating, it gets in your blood and nothing can shake it. I've had this addiction since about the age of five when my parents were transferred to an office just outside of LA, unfortunately as much as there is to love there is also that much to dislike (my mom hated it there) so we moved back to the Midwest a year later.

Not that I have any intentions of moving anytime soon, and certainly not to the coast, but someday in my life time I would like the opportunity to become friends with the beach and it's nature beauty. I want the chance to sail the waters not just once in a blue moon but maybe every other weekend-I'll even split the holidays-you get Thanksgiving and I'll take Christmas, that kind-a-thing. I think it would work don't you?


Fortunately for me I have a lot of family around me, right here! I don't want to give them up, not that I see them often enough but I can only imagine how hard it would be if I were even further away. Time is an amazing concept, either there's too much or not enough; I think in my case 90% of the time there is NOT enough of it (unless i'm @ work). It's probably my own doing though and I'm okay with that. I like to keep busy and apparently that means even on Vacation, humm. By the looks of my photos you wouldn't think that I even sat down, but I assure you I did @ least for a brief moment. Of course I don't think even I got as comfortable as these two, how awesome is that. These two meerkats are only the beginning! 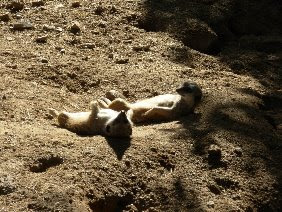 Loved the dolphins, Bill & I paid a little extra @ Sea World so that we could get a behind-the- scene look at operations, got to feed Sparky here and a couple of his park mates. Next time I'm going to get in the water with these amazing mammals. Totally Cool! 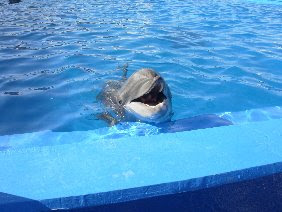 And of course when you are @ Sea World you have to see Shamu! Yep it is a must to see the Orca Whales and the 'Believe' show that they put on. I was simply in awe of these huge beautiful creatures, they are absolutely enormous and still this trainer was giving him a hug, how awesome is that! Where do I sign up to do that? 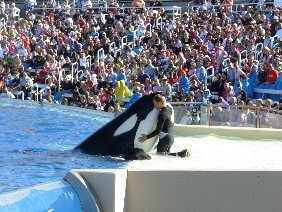 Our Vacation to San Diego, to say the least, was packed full of things to do. We flew in on Friday and got settled into an awesome little condo right off Mission Beach, literally the boardwalk was our front porch, and then nothing but surfers and sand...loved it! Although I became fond of it, the first morning we learned very quickly that there would be no sleeping in because surprised to say, the boardwalk is full of people (the earliest 5:30 am). People riding bikes, running, walking their dogs, pushing a stroller and jogging, lots of women enjoying their morning java, and one guy was even playing guitar while riding his bike {that's talent in my book}. I found that after getting use to it, it actually gets you.... It's gets you up and wake and the energy that the surf and salt brings in, makes you want to take on the world! What more could you ask for on vacation? Anyways, we hung out on Saturday with Bill's cousin who lives in betweeen San Diego and Los Angeles; she was nice enough to come down to the condo and stay a couple of days. I was just glad I had the opportunity to get to know her, wonderful person, I can see why my husband has always liked her so well. On Sunday we went to the Chiefs game, which we lost yet again, to the Chargers (SHOCKER!) humm; then on Monday we headed to the Wild Life Park and had a good time there (except for all the walking-I think we had gotten off the path a bit-or else we were just plain lost). Tuesday was our last day there and we spent a better part of it @ Sea World which I've already established was my favorite, although had we had time to go see Old Point Loma Lighthouse, that might have put S.W. in second - I can't be for sure. You know I'll just have to go back and see the lighthouse and maybe take a harbour cruise around the bay, then go back to Sea World so I can really compare the two hand-to-hand...yeah... wouldn't that be nice :)) 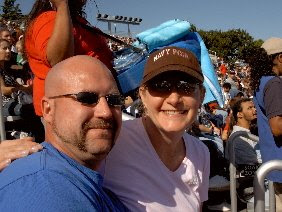 Bill & I @ Sea World preparing ourselves to get soaked by Shamu! 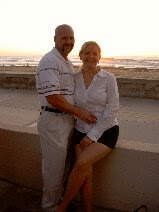 Bill & I dressed up for an evening out @ the Gas Lamp Quarter. I think we look GOOD! FYI: Print this photo now if you're needing a new one of us together, because it isn't very often that my husband cooperates with me when taking pictures.

As for the rest of our evenings we pretty much stayed in, we had gotten food for the frig the day we got there and plenty of alcohol, so other than our first night in town and then our second to last night in town, we pretty much just chilled out @ the condo, and why not-it was comfortable and had an awesome view! I did take a little something with me to work on if I had felt so inclined and so one evening (yes just one) while the others played cards, I did a little scrappin'. Did I mention that there were 6 of us on this little adventure? Yep, it started 4 years ago that we all go once a year to an 'away' game and this year it just so happened to be to the coast-yeah. By the way it was technically only my 3rd year but the first one didn't really count because although I was in the same town, I had opted to spend the time with my best friend instead, so.... long explanation but you get the idea. Bunch of friends all hanging out and having a good time, I'm excited to know where next year will be (I've heard talk of Colorado), that is if I am not pregnant next year (hopefully I will be) we'll see.

Anyways about the mini I did in San Diego, I will post that tomorrow if I get a chance. It is cool, I love it and the fact that I did it with such a limited amount of supplies, I will definitely try that approach again. In the meantime, thanks for reading and just b.....relaxed!!!