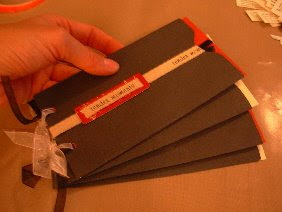 Happy Anniversary !!!!
My husband and I were married four years ago today at Heceta Head Lighthouse on the Oregon Coast ( I would recommend visiting if you ever get the chance...it's absolutely gorgeous). Anyway we are going out tonight for a little while to celebrate, nothing big just dinner and some games @ Dave & Busters, might even catch a comedy show at Stanford's so it ought to be enjoyable. Maybe for our ten year we'll go all out and do something crazy but for now we are pretty easily entertained so this is good. I did ( of course ) make him an anniversary card or rather a mini book to celebrate in my own way, now whether or not he really cares about them-probably not it's a guy thing-but I'm okay with that and you know what, it'll be there in the years to come so maybe our daughter will like having that down the road. The pictures below are from the project; the thing I like about this is that it was so easy and fairly fast, which is important since I'm a bit of a procrastinator, if it weren't for the last minute not much would get done. But that's funny that I say that because I tend to do better and more work when under pressure to get it done and I think that's because I don't have time to debate over every little detail I just do it and move on. Now if only I could incorporate more of that same attitude in my scrapbooking, imagine the things I could do. 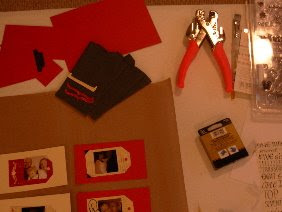 Yes I can create quite a mess during a really good crop session and I'm okay with that because as Ali says, "it's progress". The materials I used for this are scattered all over the table and the floor, most times I am the only one home when these kinds of projects take place or else my two year old would be into everything! 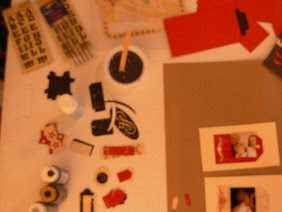 As you can see paint is a big one for this and I used pieces from a punch-out kit by Rusty Pickle also, I think that set of cardstock tags was 'Mayflower'. 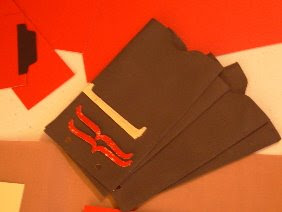 For the envelopes I used some old tax receipt envelopes that my husbands grandmother had had for years, that's where the paint came in. I did a quick cover with gesso then mixed up the color I wanted and went with it. 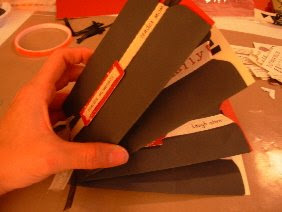 In between the pages (envelopes) I used twill words tape and then another piece from the cardstock collection as a ribbon slide. Each of the words or phases on the twill goes along with what the message on the inside card says, more for decoration but unity is always good too. The idea worked better than I thought so I went with it for all 'four' envelopes, being that it is our 4th anniversary! 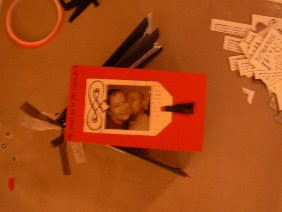 This project was fun and quick as I said earlier, I think I started it at noon and finished it at three so that is fast for me. It has also inspired me to just keep going and doing and not to worry about the little things because in the end it is what it is. So hopefully here in the next couple of days I will have several more un-finished projects finished and up here for everyone to see and hopefully enjoy. Until next time...just be!