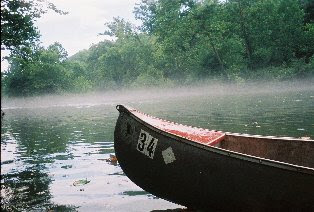 Our annual canoe trip is the highlight of our summers these days. Now to some that may not sound like much but to us it is FUN. We get to go away for a weekend and act like we're 21 again (of course we pay for it later). But the whole concept is to be silly, have fun with our friends, drink till we can't stand up straight, and just shake off the daily grind that leaves us feeling uugghhh for far to much of our everyday lives. It's tiring but rejuvenating at the same time! We can be (to an extent) totally irresponsible, and pretend not to have a care in the world. Those of us who have children can rest assured that they are in the safe hands of grandparents who I've come to believe are here for the soul purpose of not letting parents go totally insane. Everyone needs a break from the same ol' same ol' and that includes children; I'd almost bet that Liberty was just as much in need of getting 'away' as we were. And one of the best parts of going away for awhile, is coming home. Liberty was happy to see us as we were to see her and I swear she grew up a bit more in the three days that we were gone, amazing!

For me after coming home and getting back to the norm, I of course had to go to the next step and do something crafty with some of the photos I snapped. For some reason in the past it never occured to me to do a book about our canoe trip, but this year I wasn't not going to do one. The canoe trip has become such a regular thing for us that it's just a given, every year at the end of July... we go and anyone that we work with can come along. I believe this was the eleventh year in a row for the casino crew (me personally it was only my sixth year) but what's even more interesting is that every year it's different people. I haven't been on one yet where for two years in a row it's been the exact same people and it's still totally cool, that's just how well every one gets along...it's rare these days. Anyway for this year I decided to do a mini book, that's always my project of choice because they're fast & fun, they are the "in" thing right now in scrapbooking also, which reminds me of a new book coming out soon (I hope) by one of my most favorite scrapbook artists Mrs. Ali Edwards. Her new book is called "Sharing Your Story" I believe and it is suppose to release this month, I can hardly wait, anyway it's all about mini books. So if your interested in what she does and where I get a lot of my inspiration from check out her blog here:

The photos I've added below are of the mini book I did the week following our canoe trip, so it has really come together quickly. The only thing left for me to add in is the journaling and hopefully I won't put that off for to much longer. 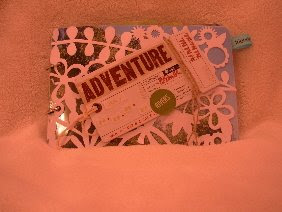 For the cover I used a transparency and cut it down to 4 x 6 size and the reason for that was so that I wouldn't have to crop my photos as well they already come as a 4 x 6 so this made more sense to me and saved me some time. On the cover of that transparency I used a piece of the pop culture cardstock by ki memories, they already have it die-cut for you which is what all the white flowers are on the cover, all I had to do was cut it down to the 4 x 6 size as well. 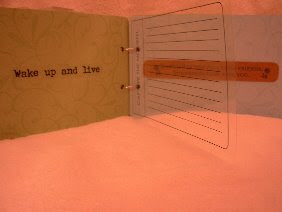 On the inside pages I used a couple of the transparencies as well and on these you may notice they have printing on them, this is what makes them so fun. You can pretty much do whatever you want to them; print, stamp, ink, paint, emboss, and because they are technically plastic they hold up much better than most cardstock, plus they still have the 'see-through' look like my photo shows. On this particular project all of the transparencies have a digital element, and this is significant for me because it makes this my very FIRST hybrid scrapbook. The lines and the words that are printed are from Mrs. Ali Edwards herself, she has done a number of things through a website called "Designer Digitals" and these are called 'photo overlays'. Now if I had done it correctly I would have opened this file in Photoshop and literally overlaid it on top of a photo and then printed the photo, but I haven't mastered my Photoshop software yet and didn't think that this way would look to bad and really I'm happy with it. The journaling will be written out by hand on those clear cards and I think that will wrap up the book very well because through the journaling you will be able to see what's coming up next- very cool! 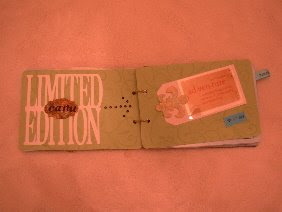 As you can see from this photo not all of the pages are transparent, I did want it to have some structure and for me that means cardstock. I used several different embellishments that I had on hand here in my ever growing stash of goodies. 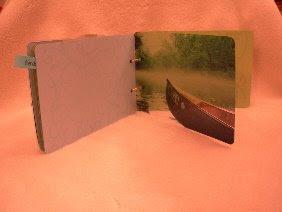 In this photo you can probably see the photo of the canoe and well that I also printed on a transparency. In truth it was accidental but I decided I rather liked my mistake and so stuck with it. What makes me like it so much is that depending on which way it is laying, the colored cardstock behind it gives it a completely different feeling. The actual photo is the same one I opened this post with so if need be scroll back to the top and check it out. Confession- I was so happy to see that this photo, out of all 27 on my cheap 'water' proof camera, turned out because this year on the trip I was 34 and maybe it's a casino thing but I have a thing with numbers always have. Anyway the final photo I have for you is as much of a reminder to myself as it is to share with all of you. Life is short and if you get the chance to get back to the heart of it then do so, it's always worth the effort. 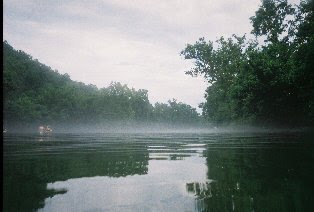 Until next time which will hopefully be soon, just be....be silly, be creative, be yourself !!!!