"It's a Nice Day for a White Wedding" - Billy Idol 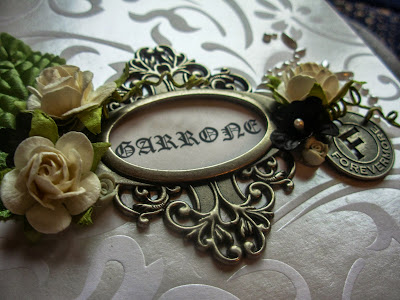 So you're getting married eh'?  Well do I have something sweet and elegant but yet super simple for you.

It's a 'Smash' Wedding Album

Yep!
I made this particular one for my girlfriend two years ago, it is just one in a handful that I have made over the years for my friends and family.
When I created this album several years back for a friend after she got engaged, my thought was to not be main stream because I am not really a traditional 'order from the registry' type of friend. I wanted to 'make' her something that she couldn't 'buy' from just anywhere. I wanted it to be a 'collect all' for her journey into a new life with the man she loves. So I suppose this was my version of a 'smash' album before Smash albums were ever sold because my thought for this album was essentially the same.

I knew after having done the whole wedding thing that you end up with a whole bunch of stuff. Nothing as important as the photos by any means but still things that you really don't want to just throw away; because it all somehow still reminds you of the chaos, the headaches, the appointments, the hundreds of dresses that you just had to try on because it 'might be the one'...till ultimately you remember the who. 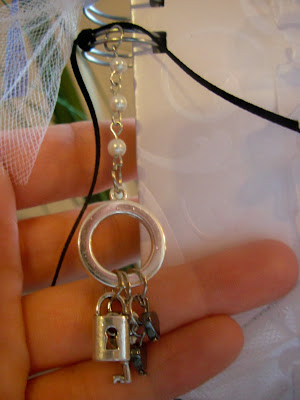 Yep it's true, I'm a female and I still don't understand it yet, and I've been there, done that. But we as women can't part with even the tiniest scrap of paper if somehow it reminds us of 'why' - why we fell in love, why we said yes, why we pull our hair out trying to figure him out. So I say, "Keep It"!  You heard me, keep it, keep it in a safe place - so that in those dire moments when you're screamin' at yourself in the mirror, "what was I thinkin'" - you'll have this small little treasure to remind you, to comfort you, to heal you -
at least that's what I'm hoping for. 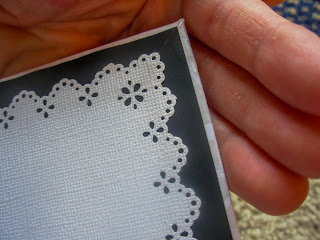 So now you want to know where in the heck can you get one of these...well it just so happens that very soon I will be offering these in my Etsy shop (custom orders will be available), unless of course you want to just...make your very own which I encourage - because they are super easy.

My front & back covers are cut from medium weight chipboard to 8 x 8; then I covered the outsides of those with this gorgeous shimmery white paper that I found @ my LSS, for the inside I used a black cardstock because it added more stability without the bulk and that's what looked good to me. For the binding I used my Zutter Bind-It-All but you could very easily use your Crop-A-Dile and bind it with book rings or ribbon, it's completely up to you. After I had my holes punched for the binding, I decided to add an extra inner layer to each of my inside covers, first because the black was just a touch to much but secondly because I wanted to give it...'flare' but not just an in-your-face kind of flare - I wanted it to flow with the whole piece, giving it a subtle elegance. I think it is rather nice, I was able to use a Martha Stewart punch that made a pattern around the whole piece, but yet I intentionally kept it small enough not to get caught up in the binding, that's where that 'elegance' comes in. 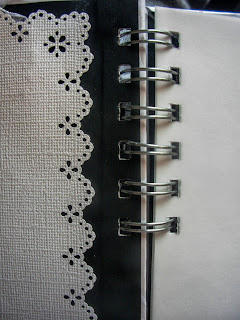 Now for the cover, which is really the most important thing - because that's what will draw people in; I tend not to stress too much about it. But with that said - I always think through it thoroughly before I ever finish off the inside of the cover, for the simple fact that if I want to use a brad to hold my face plate in place, I don't want the prongs showing on the other (inside) side. So I do all the needed work on the outside of the cover before I ever finish off the inside of the cover. That black cardstock that was just 'too much' - is actually hiding all my work - if you will. As for the cover design, like I said, I don't stress on it. 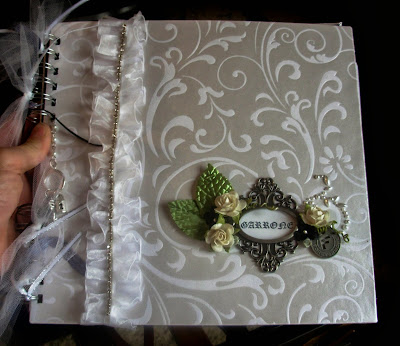 I know myself and I know that for me, my cover usually has 3 main components:
1) I always include a name plate
2)  I always use a ribbon down the same side as the binding
and
3)  I put lots of tiny flowers in and around that name plate

Having these 3 elements not only give it interest and texture, it gives you a hint of the story inside. Perfect example: the name - it is worth a thousand words to some and especially to those of us who have taken someone else's name and call it our own.
Would you agree? 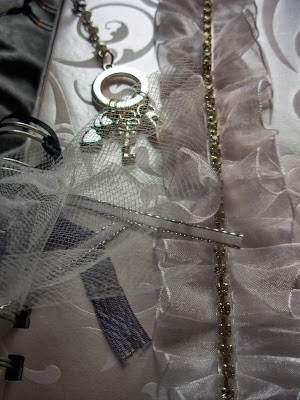 Alright so here we are with the finishing touches, yes we have to have those too. As you can see within my binding wires I have also included some charms that dangle from a chain. My thought for using chain was actually due more to the male perspective of getting married - the 'ball and chain' theory just because that's my sense-of-humor, but upon further notice you will see (hopefully) that my chain has pearl's ('balls'-metaphorically speaking) on it because well...it's a good ball & chain : )
and the charms well...
they're pretty and they help support the idea - what with the lock and the key and the heart but more importantly the circle (being symbolic) which binds the two together - as does the concept of wedding rings. 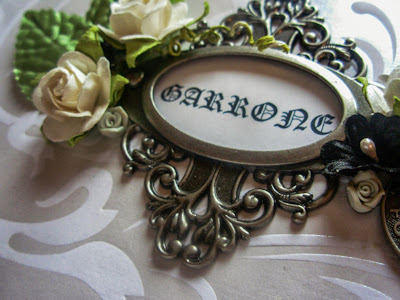 I'd love to know
leave me a comment if you so desire
...thanks for peeking