Hello everyone, boy how is it even possible that I've been gone for so long?  I used to think my mom was crazy when she'd tell me that time flew, but she was right; here it is already July and I think I'm still stuck somewhere between May and last year.  Anyways, I have finally gotten around to post this mini - finished.  Yes, it is done it's been done for awhile now I just can't seem to find the time to jump on here and get it up.  So without further ado.... I present to you the very first mini I have made for my youngest daughter, Justice. 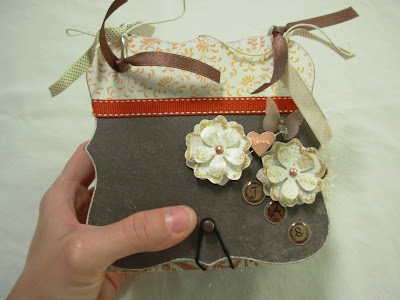 If you'll scroll on down to the last post you will have an idea of where this mini started and can therefore is how even that beginning turned into this adorable little masterpiece. 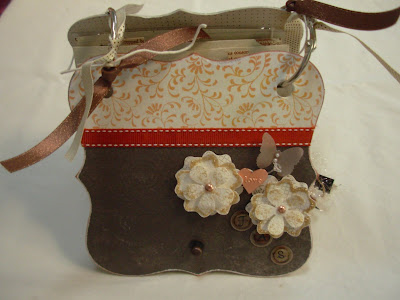 The front cover has several embellishments on it, including the flowers I made with my own flower punches.  I punched several of them, distressed them, stacked them on top of each other to give them some dimension, then used the copper brad in the middle to hold them together; the final step was the distress stickles by Tim Holtz that I added to the edges to give it a softer shine.  I then used my butterfly punch added 2 pearl dots for the body, then tossed on a straight pin and a copper heart that says 'love'.  Justice's initials are also on the cover! 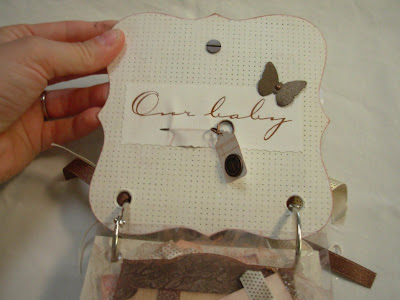 On the inside cover I used a very old sticker from my collection {in the near future I will be using lots of my older product along with the newer stuff} and then one of the new memo pins by Tim Holtz.  The tag you see hanging from the pin is actually a punch that I purchased a couple of months ago and I am loving it, using it constantly {a very good buy for my scrapbook stash} the butterfly I used as a constant throughout the rest of the book, just to help keep it all grounded a bit more.  Besides I just like the punch, another of those 'go to' tools that I use a lot {which is why I bought it - having 2 girls I figure it'll never get old} 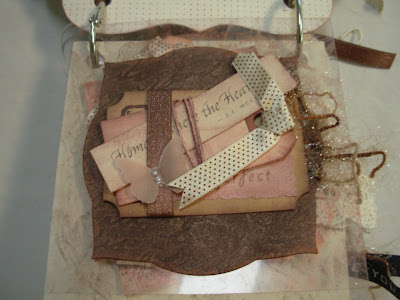 In this mini I created it to be interactive, which basically means that there's a lot to look at.  Most every page has something to pull out and look at because that's where all the photos are - they're hidden - not that I didn't want people to see them, but rather wanted people to look for them.  That and I also was practicing with 'collage'.  I have not really cared about collaging until recently, with all the stuff that Tim Holtz does, it has certainly grown on me, but it's not a style that anyone can just do, @ least not me, so I have been practicing - over all I don't think I did half bad. 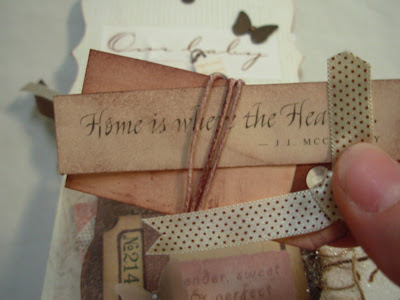 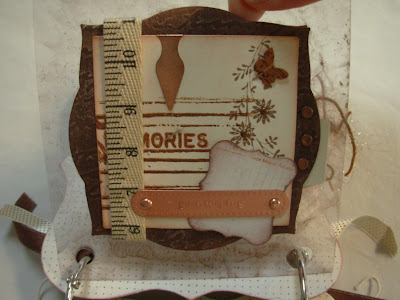 What's cool about this mini is that the original idea for it was to have a mini done for Justice, but it turns out that I learned something too {go figure} -collaging is fun - no I'm not very good @ it just yet but this has been enough of a taste that I'm ready for more and willing to try something bigger next time. 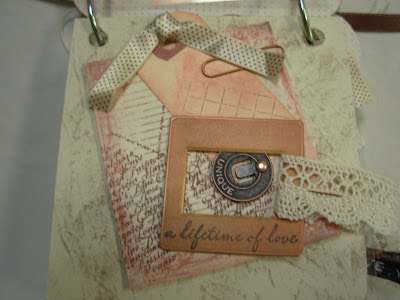 After looking through these photos again {haven't seen them in awhile} I can honestly say that I am very happy with the way this mini turned out.  Not @ all your typical 'baby' mini but then again I'm not a very 'typical' kind of girl. 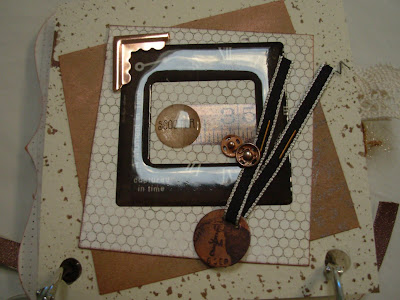 As I'm sure some of you can see, I have used a very wide range of products, everything from very old to very new, some everyday to very original and I have to say I like that.  I think sometimes we get caught up in the very latest fashion - be it clothes or shoes or electronics - when really all that 'older' stuff is just fine and sometimes better.  Right now in scrapbooking {for those of you that don't know} 'vintage' is all the rage and some of the things that people are using to tell their stories are things that your grandma and my grandma used daily and thought nothing of, to me that's saying something and I think it's totally cool.  "Antique Market here I come" : ) 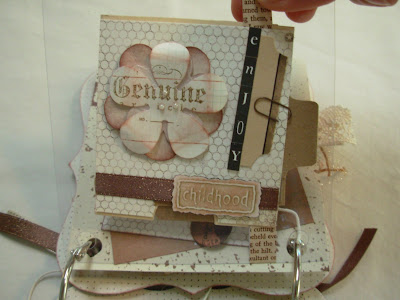 Another thing that this project taught me, is to think even more outside the box.  The flower in this photo again is one that I made using a punch that I have; I stamped it, distressed it, inked it, folded it and aged it, then added the 3 tiny pearls to the center of it, and in my opinion it looks as good as the flowers that were on the market so hot & heavy just a few years ago, if not better than those.  Of course I have a ton of those but think of all the ways to alter them now and use them in new ways - damn makes me wish for just a split moment of insanity that my days were a bit longer. 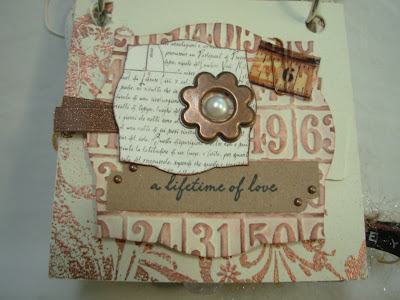 And oh boy does this remind me of a couple of new favorite products; I tell that Tim Holtz is a genius some of the things he has come up with - I absolutely love his new embossing folders, they are cool!  The piece of paper that looks kinda like a 'bingo' card is one of his folders and I like it - it gives a very well defined raised surface which only enhances the inking technique, then he has expanded his grunge line to include 'grunge paper' - that stuff is amazing - it's like cardstock but almost like it's made from rubber, because you can bend it and wad it up and punch it and emboss it and sand it and God knows what else and it keeps its sturdiness, it's flexible and has a give to it that no other paper that I have found can.  Amazing stuff! 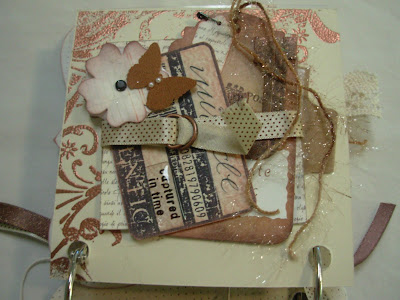 Well I am going to stop typing for a moment and let you get through the rest of the photos ! 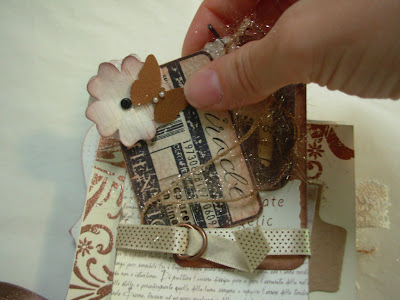 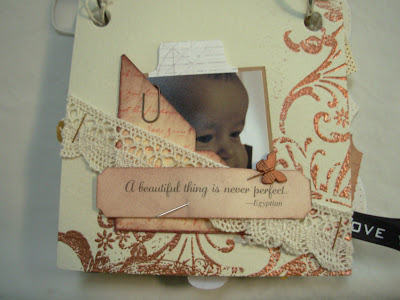 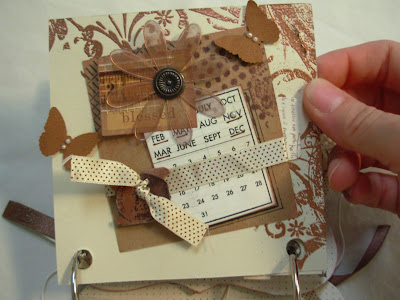 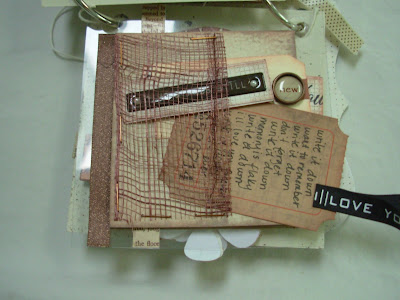 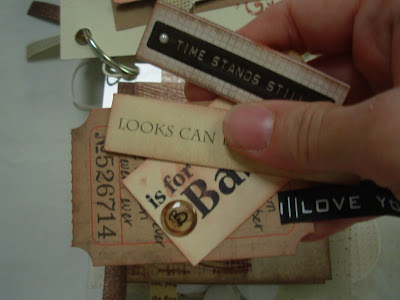 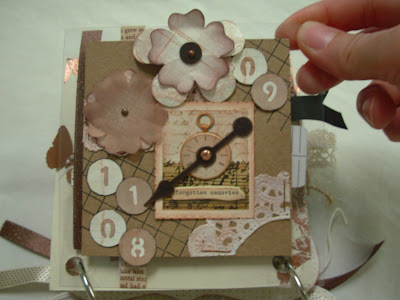 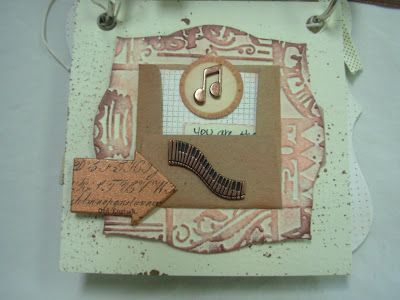 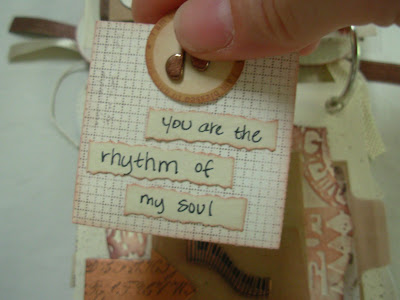 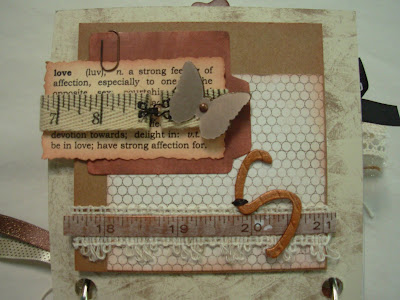 Okay I have to jump in here just real quick because I want to point out my hook & eye ensemble that I did here, if you look closely you'll see it on the measuring tape ribbon.   I love it and will certainly use that again - I'm thinking on my next series of layouts that I have lined up 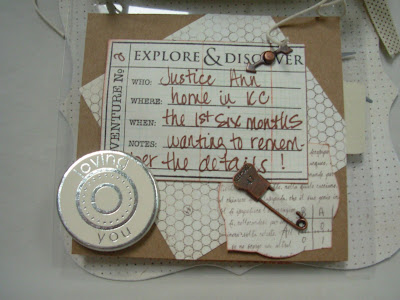 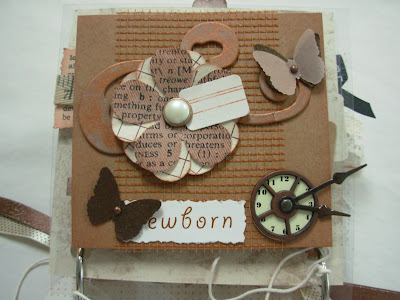 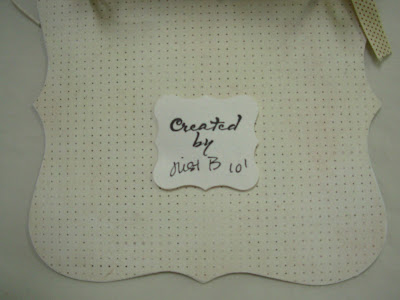 Alright well this is it, the finished book, hope you liked what you saw.  Unfortunately this is all that I have for you today but as always my goal is to never wait as long as it usually ends up being but if I can get something else up for you all soon then I will, until then Thank You for stopping in and have yourself a great weekend!
Just B....creative....your way!