Hello Hello
I am back again today to share with you the second piece I made for my sister-in-law and again I will apologize for the photo quality, they were poorly done and I only have me to blame.
As I mentioned in yesterday's post I was trying some new ideas for a mixed media piece and the inspiration for this one actually came from a graphic art print that a good friend of mine has hanging in her home so I attempted to copy the idea but with a mixed media approach.

My first thought was to get a list of words that described Jen's life and things she loves so...if you can imagine all the words that you would use to describe your life and things you love, you'd probably have a fairly decent list I'd imagine.
The next step was to decide how to spell them out: was I to use sticker letters, die cut letters, chipboard, or an assortment-also was I going to use die cut words or not. I went with die cut letters and words using several of Tim Holtz's dies to accomplish this overwhelming task...and I am not kidding when I say 'overwhelming'.  Cutting out letter after letter then adding in the words...well it took forever it seemed like but that was only the beginning because once that was done then the trick was to figure out how to arrange them all so that they fit on my canvas, being that this was my first attempt at anything like this my canvas was rather small, I think 11 x 7...? 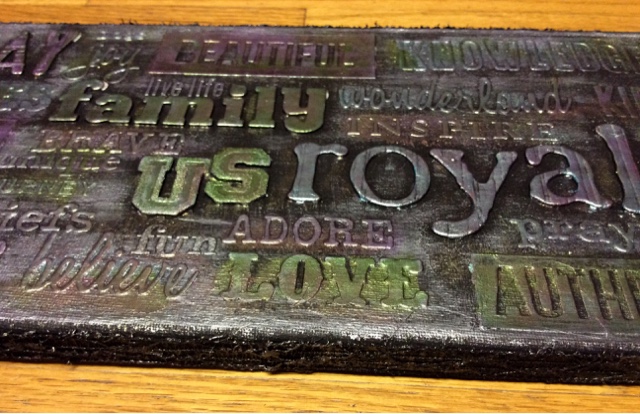 Then, as if up to this point hadn't already been a pain-in-the-arse, I had to figure out how to adhere them all down...let me tell you, adhering them down letter by letter and trying to keep them lined up properly was another major pain-in-the-arse. But all is well that end's well and well...what do you think...did this one end well? I rather think so and although quite a lot of work is involved, I'm looking forward to creating one of these pieces for my own home, maybe just a bit larger though. 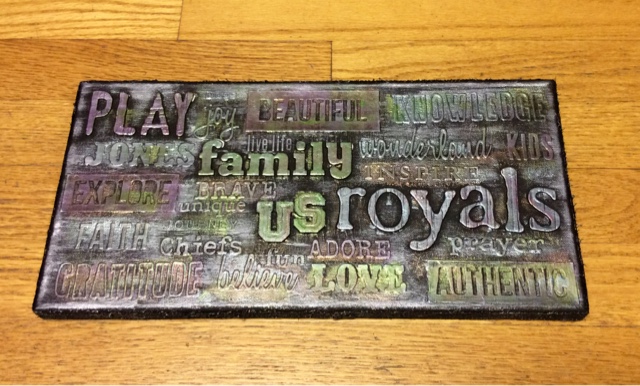 So you are wondering if Jen liked her canvas piece...I think she liked it very much, in fact a good friend of hers has requested I make one for her birthday...humm? Maybe I will but you'll just have to wait and see.
Thanks for stoppin' in and I hope you have a great day!