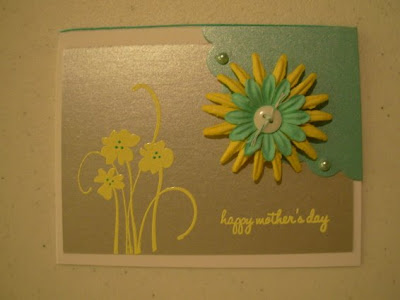 How many cards can one pregnant scrapper make you ask? Well quite a few when need be. Yes from the month of April to the end of June I make quite a few cards, and this year I had graduation on top of the norm so I have made - let me think - 12 birthday, 5 mother's day, 5 father's day, 2 graduation, 2 thank you, 1 wedding, and 1 baby - being pregnant I might have forgotten a few too, so that's roughly 30 +/- a few. I'd say that's pretty good for me. As of lately I have been trying to force some energy, in order to get stuff done before baby #2 gets here, but that's still difficult; my creative drive is taking a more practical approach these days so I've been going with it or rather trying to. I have been able to accomplish some layouts and plan to work on some more tomorrow so we'll see. 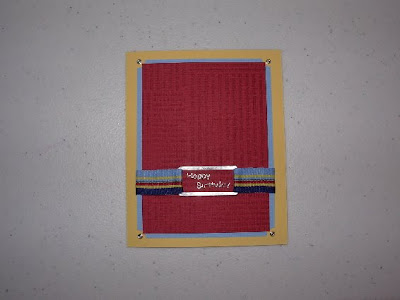 As of right now I will give you an idea of some of the cards I have done recently. This one I did for my nephew's birthday - not to fancy - guys just don't seem to care so much about that which is a nice change of pace for me. The following is a birthday card I did for my best friend, she is one of those that just likes whatever I do, so I feel a bit more free to really try something new & different. This one turned out to be fun & playful so I hoped that she liked it. 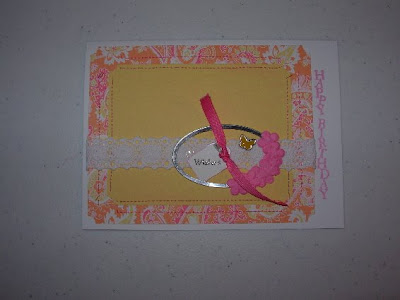 This last one is the one I did for my sister-in-law, and actually I did go a bit on the artsy side with it. There is not a whole lot of product, mostly just stamps and ink. I gave it a bit of a shine and a ribbon to finish it and am really happy how it turned out. It is very simple yet elegant at the same time. 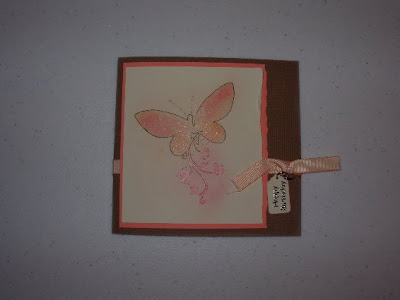 Now I almost forgot to mention the very first card, that was the one I made for Mother's Day. Now normally I will make one card only (I try to make individual cards based on the person and their personality) and not reproduce it, but in the interest of time but mostly energy, this year I found one idea that I liked (yes I scrap lifted this one) and made all 5 of them the same. It probably won't be a habbit, but I did like the ease of it a whole lot better. It can be very challenging at times to come up with one or two card ideas, much less 5 - so for Father's day I believe I will be doing the very same thing - picking one idea and making all of them the same (sorry dads).
Now as for Christmas, that is the one exception for me (the other exception). I try to do as many cards in bulk as I can stand. Normally I just get tried of making the same thing over & over, so I do change it up a bit; but for the most part I will make 20 of the same card for Christmas time - then come up with another design and make that one 20 times. This last year I made - I think if I remember correctly - 70+ cards for family & friends. No doubt it will be that many again this year, if not more. So already I am beginning to think of some card ideas that are easy but elegant. Wish me luck!
That's all I have for today, hope everyone is enjoying their summer1
just B

Aisling's Momma said…
I absolutely loved the card...you are amazing. I save them....you are too good to me. :)