I believe the saying goes something to the effect that 'this is the time to have the time of your life', well for me this is a daily struggle as of lately, not nearly enough time and well... life (in general). I haven't been able to get near as much done as I would have liked but hopefully now with the new year fully under way, that will change. My goal is to post on either Friday or Saturday after my weekend (Tuesday and Wednesday) and the goal over my weekend is to get something done; whether it be a few cards, or a couple of layouts, or maybe even the process of a mini book, I would like to get something up for all of you to see. In other words, "I have been slacking long enough" : ) There have been several projects that I mentioned last month that I was going to try to accomplish and to be totally honest I haven't done any of them for many reasons (didn't help that my hard drive gave out either), but I will try to get some new stuff done and up soon.
Life has been happening here though, on the home front. Over this last weekend we had a bunch of family & friends over to celebrate Liberty's 3rd birthday. She was so excited to have a "Tinkerbell" party and to be able to have so many people come & share. I definately want to Thank everyone that came & helped make her day extra special. On Friday, I surprised her and her daycare class in the afternoon with birthday cupcakes, and boy was that fun. A room full of very happy 2 year olds and 1 three year old, of course I think her teachers enjoyed it just as much : ) I have to say that will certainly be worth doing again in the future.
I am enjoying my 'Word' for this year and have really tried to let it influence my daily routine. I have found so far that I'm not near as stressed out as I was towards the end of last year so already I think it is helping. For those of you not familiar with the concept, check out this link to one of my favorite scrap artists:
http://www.lifeartmedia.com/newsletter11.html
I think this weekend I will be putting my December Daily album on hold (it's already taken me this long to get to it, what's one more week) and work on some layouts instead so if I do happen to get anything done, then I will certainly get them posted for you. In the meantime, here is just one small thing I did happen to get done during the holiday season, it was a gift to my Grandma and rumor has it she really liked it. 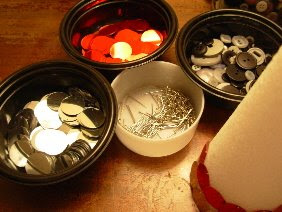 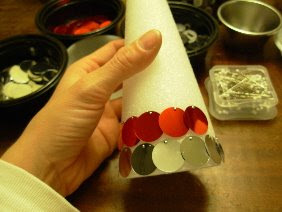 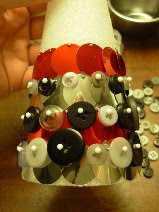 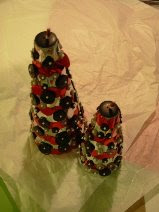 This little guy is called a 'button tree' and I got the idea from Ali's blog (I get a ton of ideas from Ali, she is supper creative). The original idea is to use all buttons and it looks totally cool but I decided to change mine up a bit, so instead of all buttons, I also used the large sequins. As for the buttons, any head pin will do to keep them in your styrofoam tree; but to keep the sequins in, I found out the hard way that the longer length sequin pins work better (3/4 inch I believe). On the top of the tree I used a head pin as well and added a few sead beads on it before putting it in the top, I did have to use some adhessive to keep this top pin in place and it might not be a bad idea to use an adhessive when putting all your pins in, give them a little more holding power.

Anyways that's all for now, as I said I do plan on getting down to an actual schedule for postings, but we'll see. Hopefully tomorrow and Wednesday will be productive days for me and I will have lots to share come the weekend. Thanks for checking in! : )